Shabana Azmi took a trip down the memory lane and shared this picture with her Instafam. 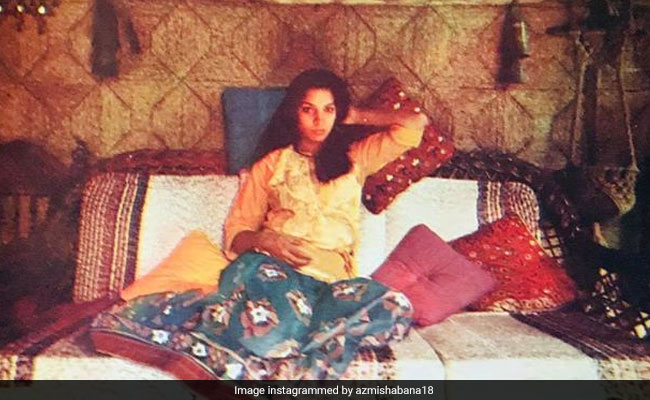 Actress Shabana Azmi shared a throwback picture on her Instagram page on Tuesday, which opens the window to her initial days in Bollywood. The 68-year-old actress shared a picture from her early days in the film industry and said that her 'aesthetics (were) greatly influenced by her mother Shaukat Kaifi,' which in turn she attributed to Ms Kaifi's tryst with theatre. In the photo, Shabana Azmi can be seen dressed in a printed skirt and contrast yellow kurti. She captioned the post, "Throwback picture by Partho Bartholomew. #JankiKutir. My aesthetics greatly influenced by my mother #ShaukatKaifi. Her tours with #PrithviTheatre exposed her to the beauty of India's rich crafts."

Shabana Azmi is the daughter of poet Kaifi Azmi, who also doubled as a lyricist and a writer in the film industry, and theatre artiste Shaukat Azmi. Shaukat Azmi has featured in a handful of Bollywood films and she's best-known for her roles in Umrao Jaan and Garam Hawa.

Throwback picture by Partho Bartholomew . #Janki Kutir. My aesthetics greatly influenced by my mother #Shaukat Kaifi. Her tours with #Prithvi Theatre exposed her to the beauty of India's rich crafts

Shabana Azmi, winner of five National Awards, started her career in films with 1974's Ankur soon after she graduated from the Film and Television Institute of India or the FTII. She went on to star in critically-acclaimed films such as Arth, KhandharPaar and Godmother - she received a National Award each for these films. Her films resume has several other distinguished projects including Masoom, Mandi, Nishant, Shatranj Ke Khilari and Sparsh.

In recent years, she featured in films like Jazbaa with Aishwarya Rai Bachchan, Neerja with Sonam Kapoor and Chalk n Duster, co-starring Juhi Chawla. On the small screen, Shabana Azmi has featured in shows like 24 and Amma in India and The Good Karma Hospital, a British TV series.