Shabaash Taapsee Pannu: She Braces For Summer Like A Champ 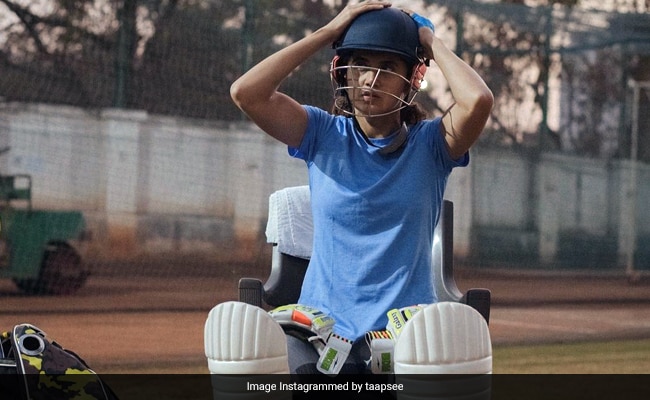 Nothing can bring down a phenomenal talent like Taaspee Pannu. Not even the summer heat. Need proof? Just take a look at the actress' post where she gets ready for some cricket in the blazing heat. She is prepping to play iconic cricketer Mithali Raj in the biopic Shabaash Mithu. Taapsee has been training intensively to get into the physical and mental framework of the ace sportsperson. One can only imagine how tough it must be to undergo rigorous practice in the summer heat by looking at Taapsee's caption, "Summer has arrived #ShabaashMithu."

Fans reacted with heart emojis. The image is the latest in the series of several photos from Taapsee's training that she has been sharing with her Insta fam. In another image, posted just a day ago, Taapsee can be seen hitting the ball straight at the camera. The caption read, "Catch it!"

Another photo captioned "Down the line! #WIP #ShabaashMithu" shows the actress sweating it out in the nets. Reacting to the photograph, director Anubhav Sinha said, "Ab India khelegi kya??? (Will you play for India now?)". Fans lapped up the snaps calling her hard work "inspirational". The biopic was announced nearly a year ago on Mithali Raj's birthday.

Recently, Mithali Raj became the first Indian woman to score 10,000 runs in international cricket across all formats. Taapsee reacted to the news saying, "Of the many firsts."

Of the many firsts @M_Raj03https://t.co/eCsJ1SVN7V

In addition to the Mithali Raj biopic, Taapsee will also play an athlete in the much-awaited Rashmi Rocket.