Taapsee Pannu as Mithali Raj, sporting the blue Indian jersey, wears a fierce and determined expression when on the pitch 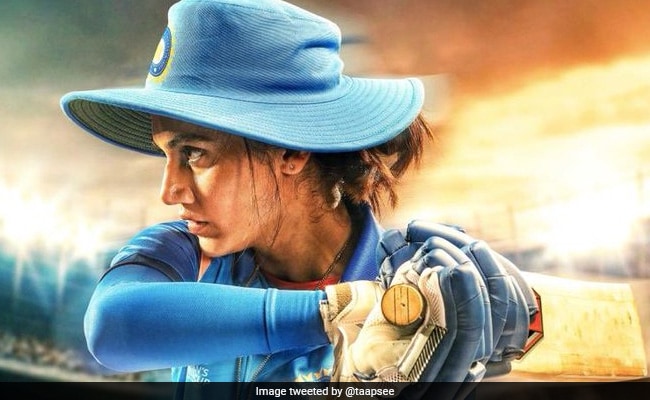 Shabaash, Taapsee Pannu! The 32-year-old actress just dropped the first poster Shabaash Mithu, the upcoming biopic of women's cricket team captain Mithali Raj and all we can say is shabaash! While sharing the first look poster, Taapsee reminded everyone of Mithali Raj's epic response to a sexist question in 2017. "'I have always been asked 'Who's your favourite male cricketer?' but you should ask them who their favourite female cricketer is.' The statement that made every cricket lover pause and introspect that do they love the game or the gender playing it," Taapsee wrote in her tweet. "Mithali Raj, you are a 'game changer'," she added.

Needless to say that Taapsee dominates the first look poster of Shabaash Mithu. Taapsee as Mithali Raj, sporting the blue Indian jersey, wears a fierce and determined expression when on the pitch, as she gears up for her next shot.

Don't mess with Taapsee Pannu in Mithali Raj avatar on the pitch.

"I have always been asked who's your favourite male cricketer but you should ask them who their favourite female cricketer is." The statement that made every cricket lover pause n introspect that do they love the game or the gender playing it.@M_Raj03 you are a 'Game Changer' pic.twitter.com/2VlxYpXmSM

Thanks @taapsee !!
Looking forward to you bringing life to my story on the big screen! https://t.co/eXoODFw674

Ahead of the ICC Women's World Cup in 2017, Indian skipper Mithali Raj was asked by a journalist to name her favourite male cricketer and her response had won over the Internet: "Do you ask the same question to a male cricketer?" Sports journalist Adam Collins' tweet about Mithali Raj's response went crazy viral.

Superb response from Indian skipper Mithali Raj. Asked by a reporter who her favourite male player is: "Would you ask a man that?" #WWC17pic.twitter.com/RqgVLzXp46

Taapsee Pannu got movie buffs and cricket fans excited when she confirmed her casting in the Mithali Raj biopic on the cricketer's 37th birthday in December last year. "Happy birthday, captain Mithali Raj! You have made all of us proud in more than many ways and it's truly an honour to be chosen to showcase your journey onscreen," tweeted Taapsee.

Happy Birthday Captain @M_Raj03 On this Birthday, I don't know what gift I can give you but this promise that I shall give it all I have to make sure you will be proud of what you see of yourself on screen with #ShabaashMithu
P.S- I'm all prepared to learn THE 'cover drive' pic.twitter.com/a8Ha6BMoFs

Directed by Rahul Dholakia, Shabaash Mithu will hit screens on February 5, 2021. On the work front, Taapsee Pannu has a busy line-up of films. Anubhav Sinha's Thapaad and Vinil Mathew's thriller Haseen Dillruba are on her list of upcoming projects.