"This is going to be 'crazy' fun," wrote Taapsee Pannu 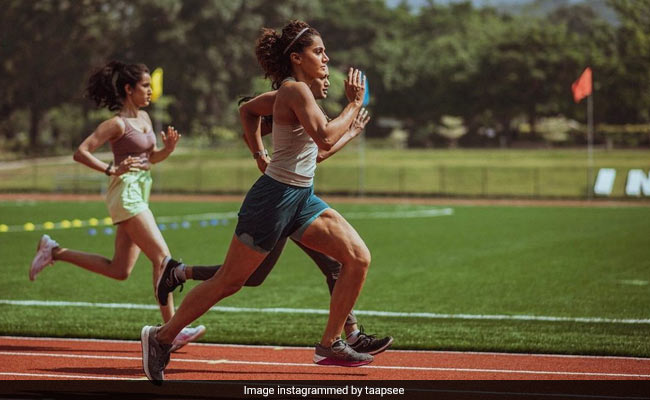 What's keeping Taapsee Pannu busy these days? Well, a lot of things. The actress has been shooting for films back-to-back and her latest Instagram post kind of explains her jam-packed schedule. She thinks it is going to be "crazy fun." Taapsee Pannu, who plays the role of an athlete in Rashmi Rocket, recently wrapped the first schedule of the film. However, she began shooting for her next project Looop Lapeta in no time. Posting a picture of herself from a running track, the actress wrote in her caption: "The boot camp like schedule 1 gets done. Now running towards the Lola family. Going to have a very chill cool stopover with the looopers. The best unwinding I could've asked for ! This is going to be 'crazy' fun. #RashmiRocket to #LooopLapeta."

Directed by Akarsh Khurana and co-produced by Ronnie Screwvala, Neha Anand and Pranjal Khandhdiya, Rashmi Rocket is expected to release sometime in 2021. Rashmi Rocket is said to track Rashmi's journey from a tiny village to athletic contests.

Remember when we said that the actress has a jam-packed schedule? She also has two more projects in the line-up. The first is Vinil Mathew's Haseen Dillruba (also starring Vikrant Massey). She will also feature in Shabaash Mithu, based on the life of Indian women's cricket team captain Mithali Raj. The actress was last seen in Anubhav Sinha's critically acclaimed Thappad.