Taapsee Pannu, who will star as an athlete in Rashmi Rocket, has been vigorously training for her role 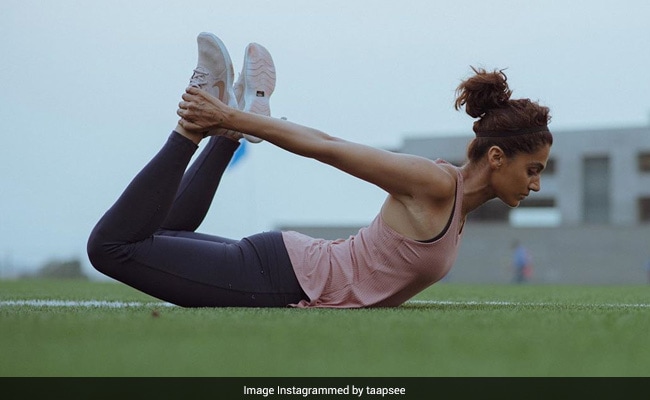 With every new post, we are becoming fans of Taapsee Pannu's fitness level. One day, the actress shares a picture from her gym session, the other day she gets to the racing track. Now, she is a human bow and arrow. The actress, who will play the role of an athlete in the film Rashmi Rocket, has been prepping day in and day out. On Tuesday, she shared a picture of herself on her Instagram profile. In the picture, Taapsee can be seen in Dhanurasana (or Bow pose). She captioned the post: "The bow and the arrow." She added the hashtag #RashmiRocket to her post.

The bow and the arrow ! #RashmiRocket

Taapsee Pannu began the week by sharing a picture from a racing track. She wrote "let's do this" in her caption. This is the post we are referring to:

Before starting her vigorous training, Taapsee Pannu was on a holiday in Maldives with her sisters Shagun and Evania Pannu. PS_ She also followed her strict diet during her holiday.

Taapsee Pannu's fans will get to see a lot more of her as she has a busy schedule ahead, with back-to-back projects lined-up. The actress' forthcoming projects include Vinil Mathew's Haseen Dillruba (also starring Vikrant Massey), Aakash Bhatia's Looop Lapeta, which will also feature Tahir Raj Bhasin. It is the Hindi adaptation of the 1998 German hit Run Lola Run. She will also star in Shabaash Mithu, based on the life of Indian women's cricket team captain Mithali Raj. The actress was last seen in Anubhav Sinha's Thappad.