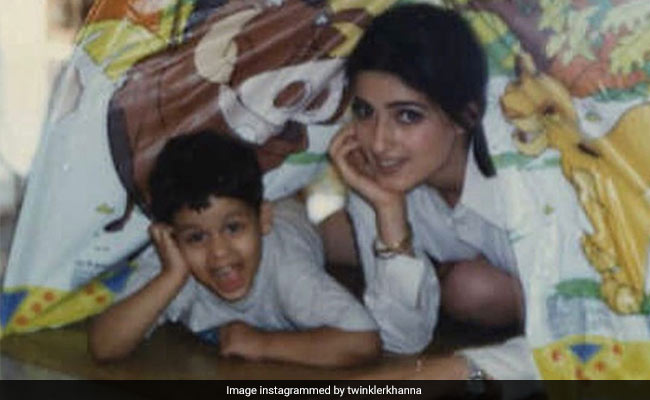 Twinkle Khanna's latest Instagram entry is a blast from the past in true sense. On Monday, Mrs Funnybones struck gold in her family photo archives and shared the cutest possible birthday wish for her cousin Karan Kapadia. In one of the pictures, Twinkle and little Karan could be seen posing in a similar manner as they peep from a kids' playhouse. Twinkle also shared relatively recent picture of herself along with Karan. The caption on the post read: "Happy birthday Karan Kapadia. Love you loads - yesterday and forever #BirthdayBoy." Karan was quick to respond to Twinkle's post and he wrote: "Thank you, love you."

Karan is Dimple Kapadia's late sister Simple's son. Karan has studied acting at the Jeff Goldberg Studio in Mumbai and he has also worked as an assistant director. He made his Bollywood debut earlier this year with the film Blank, co-starring Sunny Deol and Drishyam actress Ishita Dutta. Karan played the role of a suicide bomber in the film.

Ahead of Karan Kapadia's Bollywood debut, Twinkle Khanna actively promoted his film on social media and otherwise. That's not it, Karan's brother-in-law and Twinkle's husband Akshay Kumar made a special appearance in a song in the film.