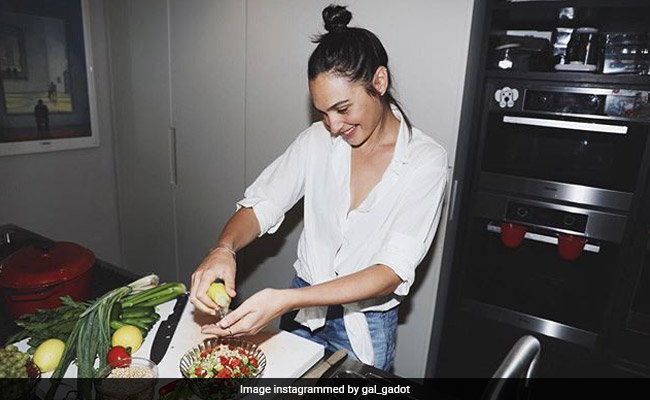 Good newwz is Diljit Dosanjh is cracking us up with his comment on Gal Gadot's Instagram. For the uninitiated, Diljit Dosanjh is a bona-fide fan of the Wonder Woman actress and often drops by her Instagram to post about his admiration for her. Something similar happened recently when Gal Gadot shared a photo of herself prepping some salad for her kids with this caption: "Love love love chopping fresh veggies for the ultimate salad for my babies." Gal Gadot, smiling ear-to-ear in the photo, can be seen squeezing some lime onto a bowl of salad. But according to Diljit, nothing can beat the flavour fest that paranthas offer. He dropped this hilarious comment on Gal Gadot's Instagram: "Acha gal sunn... aj gobi wale pranthe bana li... daee mai fadh ley aunga..." which basically means "Keep gobi parantha ready, I'll get the dahi." LOL

Here are some of the times when Diljit Dosanjh cracked up Instagram with his comments on Gal Gadot's posts: "Kudi Punjaban lagdi ah" he wrote once.

Another time, Diljit wrote this 'emotional' note (roughly translated from Punjabi) on this selfie of Gal Gadot (all in good humour, of course), which got over five thousand likes: "Because of you my image has been smeared in the Indian media and I regret that I even commented. I've even disturbed Kylie Jenner with my comments. I was just speaking my heart out, but you guys didn't let me do that too?" For those who don't know, Diljit Dosanjh also had a self-admitted crush on Kylie Jenner, whose posts he commented on regularly.

My dear friend Sivan is working on a beautiful foundation supporting an incredible cause. Sivan was a mother of precious and sweet girl named Ranni. The universe wasn't fair and Ranni had a rare genetic metabolic disease and died at an extremely young age. I will never forget her and forever she'll be in my heart. Ranni's Wish bracelet was designed by Agas & Tamar and created with love for Ranni's Wish foundation. This foundation was established in memory of Ranni Fisher and is dedicated to help children whom are suffering from genetic metabolic diseases. The bracelet is made with a red cotton string that has a small balloon attached filled with inspiration, memory, hope and future. All the proceeds from the bracelets will be contributed to Ranni's Wish foundation to assist in establishing a genetic metabolic center at the Dana-Dwek Children's hospital. #ranniswish #4ranni #

Diljit Dosanjh will next be seen in the multi-starred Good Newwz, which also features Kareena Kapoor, Akshay Kumar and Kiara Advani.