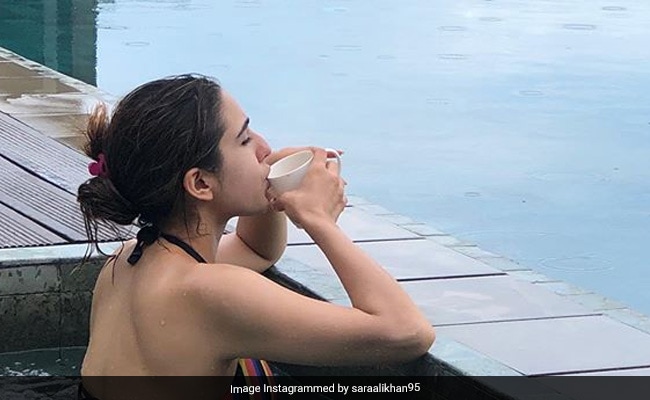 Pictures from Sara Ali Khan's Sri Lanka vacation have sugar spice and everything nice. The actress took time out from her busy schedule and she's touring Sri Lanka with her friends. Sara, star of films like Kedarnath and Simmba, made a splash in the pool and went on a city tour to live the best of her tourist life. She shared pictures from the vacation and captioned it, "Lady in Sri Lanka." Sara Ali Khan's Instafam of 14.2 million users loved her vacation album, which has over six lakh likes. Instagram users posted comments such as, 'awesome,' 'great pictures' and 'beautiful' in plenty.

Sara Ali Khan is the daughter of Saif Ali Khan and Amrita Singh. After graduating from the Columbia University, Sara Ali Khan decided to become an actor. She debuted opposite Sushant Singh Rajput in Kedarnathwhile her second film Simmba, which released just two weeks after Kedarnath, featured Ranveer Singh in the title role.

After her spectacular Bollywood debut and a blockbuster follow-up, Sara Ali Khan signed a film with Imtiaz Ali, which is tentatively titled Love Aaj Kal 2. Sara co-stars with Kartik Aaryan in the movie. Her fourth project will be David Dhawan's Coolie No 1 remake with Varun Dhawan. Earlier this year, Sara was busy shooting Coolie No 1 remake in Thailand and she also spent her birthday working. She recently completed another segment of the film in Mumbai.