"With both of you I want to travel the 7 seas because as they say the best things come in threes," wrote Sara Ali Khan 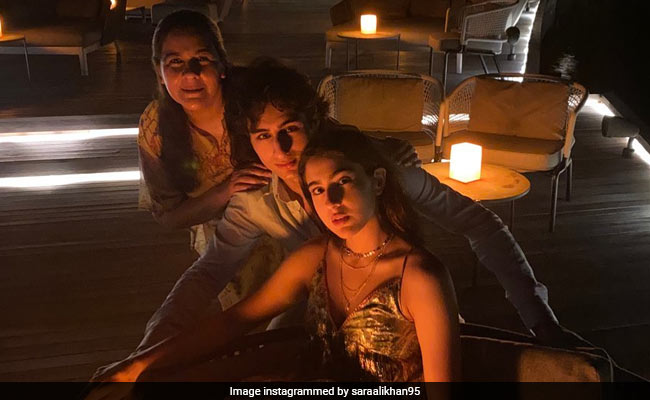 Sara Ali Khan is spending quality time with her family in Maldives. The actress, who checked into the island nation on Tuesday, has been actively sharing pictures from her vacation, where she has been accompanied by her mother and Bollywood veteran Amrita Singh, and brother Ibrahim Ali Khan. The 25-year-old actress shared a picture perfect moment from her vacation. Sara Ali Khan's caption for the post read, "Nights like these. Find us a pod- we're the peas. With both of you I want to travel the 7 seas because as they say the best things come in threes."

Sara Ali Khan treated her Instafam to stunning pictures from her vacation album on Tuesday. "Sandy toes and sunkissed nose," the actress captioned the post. ICYMI, take a look at the pictures here:

Sara Ali Khan made her Bollywood debut in 2018 and has featured in films such as Kedarnath (her debut film), Simmba and Love Aaj Kal. Sara's upcoming project is Atrangi Re, co-starring Akshay Kumar and Dhanush. She was last seen in the Coolie No 1 remake, co-starring Varun Dhawan. The film released on OTT platform Amazon Prime Video.