Poetess Sara Ali Khan's Latest Pic Is All About Sunsets

In the picture, Sara Ali Khan looks gorgeous in a grey t-shirt and denims while posing for the camera 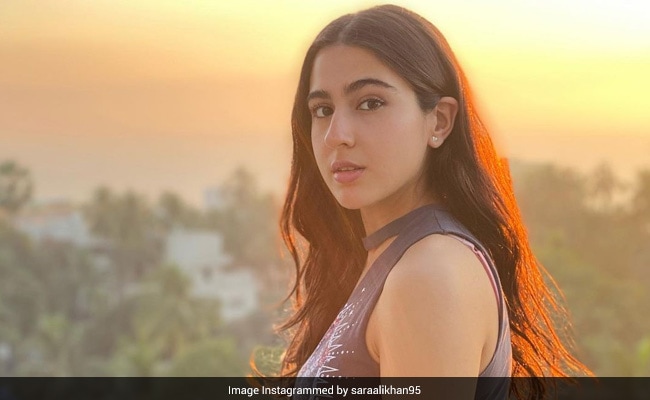 Sara Ali Khan described her love for sunsets in a poetic way on Wednesday. The actress, or should we say the poetess, posted a picture of herself enjoying a sunset and captioned it in her own style. In the picture, Sara Ali Khan looks gorgeous in a grey t-shirt and denims while posing for the camera on what appears to be a terrace. "When you see the setting Sun," the actress wrote in the caption and added: "Sara calls it a day well done." Just another day, another example of Sara Ali Khan's poetic captions. Not to miss, the actress looks breathtaking in the orange glow of the setting sun.

This isn't the first time Sara Ali Khan has shown us her love for sunsets. Remember her previous post, in which she can be seen sipping her winter chai? If not, take a look now:

Sara Ali Khan's Instagram feed is filled with posts having poetic captions written by her. Just a couple of days ago, she posted a picture with her brother Ibrahim and wrote: "Orange you glad I'm your sister. Well, you better be mister!"

Sara Ali Khan was last seen in Coolie No 1, in which she co-starred with Varun Dhawan. The film failed to impress critics, as well as cine-lovers. In his review for NDTV, film critic Saibal Chatterjee gave Coolie No 1 one star out of five and wrote: "It definitely has more colour and slickness, but all its gloss is strictly superficial. The new version is flashier and louder. The hope clearly is to paper over - and drown out - the sheer pointlessness of the exercise. But no matter what the director and his son, lead actor Varun Dhawan, try, this coolie is anything but numero uno. The 2020 Coolie No 1, released on Amazon Prime Video, is no patch on the 1995 Coolie No 1."

Lohri 2021: Inside Shilpa Shetty And Raj Kundra's Celebrations With Family