Coolie No 1 Review: Rehash With Sara Ali Khan, Varun Dhawan Is Anything But Numero Uno

Coolie No 1 Review: The film does not take into account that the world has changed since the David Dhawan-Govinda combo churned out hit after hit with their mad capers. 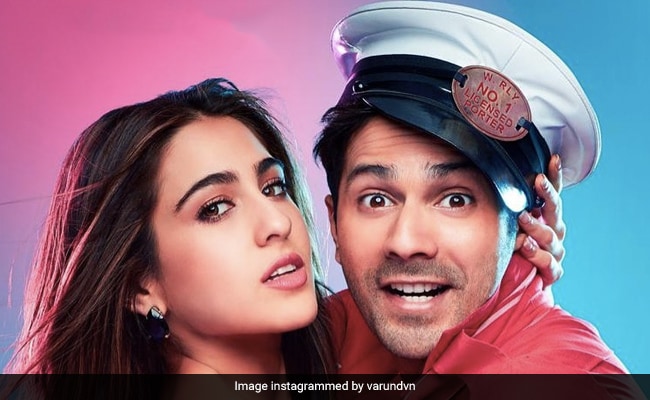 Coolie No 1 Review: A promotional poster of the film. (courtesy varundvn)

Director David Dhawan and producer Vashu Bhagnani, the men behind the original Coolie No 1, spare no effort to confirm our worst fear: the Govinda-Karisma Kapoor 1995 starrer was best left alone.

Twenty-five years have elapsed since the producer and director duo delivered one of the superhits that defined Govinda's career as a comic hero. The star isn't at hand to carry the weight of the remake on his shoulders nor is Kader Khan available to liven up Rumi Jaffery's screenplay with his dialogue. However, their absence isn't the only reason why this Coolie No 1 is a pale shadow.

It definitely has more colour and slickness, but all its gloss is strictly superficial. The new version is flashier and louder. The hope clearly is to paper over - and drown out - the sheer pointlessness of the exercise. But no matter what the director and his son, lead actor Varun Dhawan, try, this coolie is anything but numero uno. The 2020 Coolie No 1, released on Amazon Prime Video, is no patch on the 1995 Coolie No 1.

This film isn't an update (the script remains unaltered) but an excruciatingly infantile rehash that scrapes the bottom of the barrel and comes up with nothing that could justify its existence.

Come to think of it, in a year in which nothing has gone right for the world, Coolie No 1, had it been reworked with imagination and a recognition of the times we live in, might have been the harmless bit of fun that we needed in order to take our minds off the lows we have been through. Unfortunately, this is as low as a film can get (if you don't consider Laxmii). It isn't a good note to end the year on.

Varun Dhawan, who slips into the Govinda role without ever evoking memories of that inspired comic star turn, is more swag than substance as he wends his way through Coolie No 1. When he is joined by Sara Ali Khan to sway to Main toh raste se jaa raha thha (the song begins with the line 'Back to the 90s' as if we needed a reminder) and Goriya chura naa mera jiya, the original musical set pieces are never in danger of being obliterated from Bollywood movie lore.

Everything is upgraded in the new Coolie No 1. The porter now works in a Mumbai railway station, not in a nondescript bus terminus. The heroine's father isn't a Hoshiarchand from a village but a moneybag, Jeffrey Rozario from Goa. Of course, he still has a lisping brother-in-law (Rajpal Yadav steps into Shakti Kapoor's shoes).

And the coolie, who still claims to be a scion of the "king of Singapore" to worm his way into the inner chambers of the Rozario home, does not pose as a mere millionaire, but a billionaire. He is in Goa to build a new port on behalf of his father's company.

Varun Dhawan takes recourse to mimicking many a Bollywood star - Amitabh Bachchan, Shahrukh Khan, Nana Patekar and even Dilip Kumar - since there is nothing new on offer.

When Raju Coolie's ruse is about to fall apart, he adopts Mithun Chakraborty's dialogue delivery style to distinguish the porter from the young tycoon wedded to the heroine Sarah Rozario (Sara Ali Khan). But these tips of the hat to Bollywood of the last millennium are wayward because there is no clear context created for them in the script.

The hero is a proud porter always attired in starched, spotless uniform. He is an upright and tough guy who beats a rude passenger to pulp when the latter humiliates an older porter. But the poor guy's attempts to find a wife yield no results because of his station in life.

Raju Coolie's car mechanic-friend Deepak (Sahil Vaid) takes a shine to Jeffrey Rozario's other daughter Anjali (Shikha Talsania) and, like the character did in 1995, aggravates matters for everyone concerned. And like in the original, the climax plays out in a hospital, but since we have seen it all before, the replay of the rigmarole does not have the intended comic impact.

When Raju lands in Goa, Jeffrey Rozario, slimy as an eel, goes all out to please Kunwar Raj Pratap Singh, unaware that this guy is part of a plan hatched by matchmaker Jaikishan (Javed Jaffrey) to cut him down to size.

What goes missing completely in this ill-advised regurgitation is the inspired lunacy that made 1995's Coolie No 1 undeniably entertaining. Varun Dhawan and Sara Ali Khan do not ape Govinda and Karisma Kapoor. Neither does Paresh Rawal, as the father of the bride, take a leaf out of Kader Khan's book. Yet the actors are unable to impart any freshness to the reworking because the script reeks of absolute obsolescence.

Coolie No 1 does not take into account that the world has changed since the David Dhawan-Govinda combo churned out hit after hit with their mad capers. The formula that yielded dividends all those years ago no longer does.

At one point in the film, Johnny Lever, playing Inspector Godbole (the role Tiku Talsania essayed in the original but with a different name and persona), says: "Main paagal ho jaaoonga (I'll go mad)". Exactly our point. Coolie No 1 is primed to drive the audience crazy and certainly not in a good way.

The workload on dialogue writer Farhad Samji (who has a cameo as a plumber called in to fix a leaking shower in a Goa resort, a pretext for the coolie impersonating a wealthy entrepreneur to run into the owner's daughter) is immense. He goes into overdrive in a bid to inject hilarity into the proceedings.

But the lines that the characters spout hinge too heavily on puns and malapropisms (devices that Kader Khan used to great effect once upon a time but have outlived their utility) to be funny. They do not have the "heaven in the docks" and "out of the box" effect that Paresh Rawal's character would have us believe.

We are at the end of the 2oth year of the 21st century and we are still being subjected to a film that believes that body-shaming or poking fun at a man with a stutter (Rakesh Bedi, in a single-scene appearance, plays this character) is acceptable.

The performances are all so rudimentary and by the numbers that it would be futile to rate them. There is something seriously wrong with a film that wants to be a laugh riot but does not have the wherewithal to cash in on Javed Jaffery's presence in the cast. He, like the rest, goes through the motions, summing up a comedy that would have been laughed out of the theatres had it made it to the big screen.