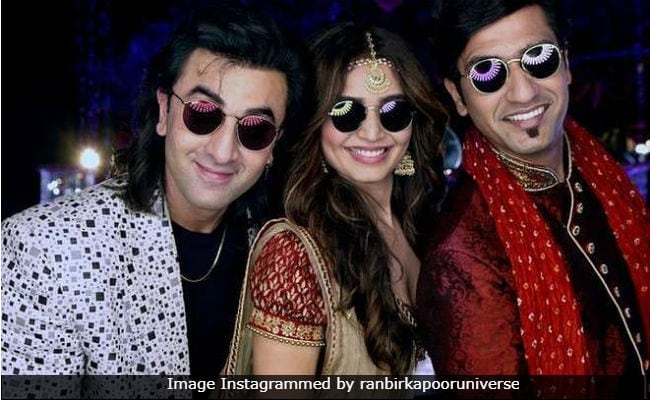 Remember the picture featuring Ranbir Kapoor, Vicky Kaushal and Karishma Tanna from the sets of Sanju that went crazy viral last month? Well, turns out that the picture is from the film's song Bhopu Baj Raha Hain, which is scheduled to release over the weekend, reports mid-day. The song has been sung by Nakash Aziz and it has been composed by Rohan Pradhan and Rohan Gokhale, better known as Rohan-Rohan. The song is a peppy party song and will be released online. A source told mid-day, "The primary tune of the trailer is derived from this song. It has been sung by Nakash Aziz and composed by Rohan-Rohan." The duo has also composed the song Main Badhiya Tu Bhi Badhiya for the film. Meanwhile, legendary music composer A R Rahman has also been credited as the guest music-director in the film.

Karishma Tanna, who played Vicky Kaushal's love interest in Sanju, revealed that she had a fun time filming the dance number and told mid-day: "I had a great time shooting for it with Ranbir and Vicky. I am sure the song will get the audience grooving. The whole crew is excited about its release now."

Take a look at the aforementioned picture:

Sanju traces the journey of Bollywood actor Sanjay Dutt, from his early days in the film industry, to his drug addiction phase and trial in the 1993 Bombay blast case.