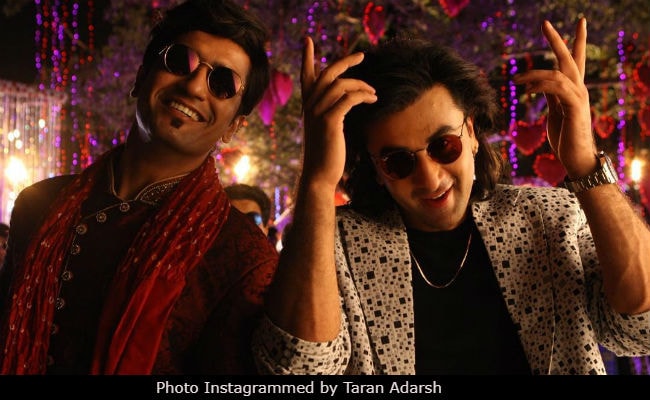 Ranbir Kapoor in a still from Sanju (Courtesy taranadarsh)

There is no "slowing down" for Ranbir Kapoor's Sanju, which continues to do exceptional business at the box office. After scoring a century in just three days and "demolishing" a Baahubali 2(Hindi) record (of being the highest single day grosser for a Hindi film), Sanju has now entered the first week with impressive box office numbers. The Rajkumar Hirani-directed film has garnered Rs 25.35 crores on Day 4, pushing its grand total to Rs 145.41 crores, Bollywood trade analyst Taran Adarsh tweeted. "Non-holiday / working day. Reduced ticket rates on weekdays. Yet, Sanju puts up a splendid total on Day 4 [Monday]. This one is not going to slow down soon. Friday Rs 34.75 crore, Sat Rs 38.60 crore, Sun Rs 46.71 crore, Mon Rs 25.35 crore. Total: Rs 145.41 crore," Taran Adarsh wrote.

Sanju's performance at the box office in the second week will also prove to be very crucial since it will determine whether the Rajkumar Hirani-directed film will surpass the lifetime collections of PK (which is also helmed by Mr Hirani) or Dangal.

Too early to predict the *lifetime biz* of #Sanju... Will it surpass Hirani's highest grosser #PK? Will it challenge #Dangal [highest *Hindi* grosser after #Baahubali2]? Much depends on how #Sanju fares in Week 2... It's a wait-and-watch situation right now!

Sanju opened at the theatres on Friday to positive reviews and critics as well as the audience can't stop raving about the film. In his review for NDTV, film critic Saibal Chatterjee gave Sanju 4 stars out of 5."The 160-minute film, which is essentially a touching father-son drama that also pays tribute to some of Hindi cinema's greatest lyricists, glides through its busy, pulsating narrative without ever suffering anything akin to an ungainly wobble. Kapoor shines bright. That is actually an understatement. He dazzles us; he catches us unawares; and he sweeps us off our feet. In one word, he is luminous," he wrote. Ranbir Kapoor's film emerged as the highest-opening weekend grosser of 2018, toppling the collections of films like Race 3 and "Padmaavat."