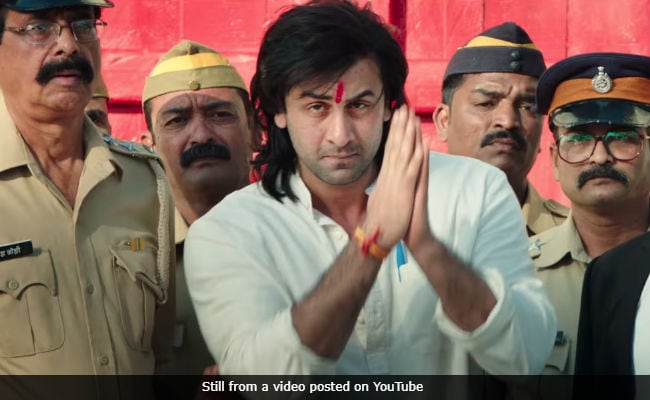 Ranbir Kapoor in a still from the film Sanju

Ranbir Kapoor's Sanju has scored a century at the box office and with this magnificent number, it has also created 'history' by 'demolishing' the highest-single day record Baahubali 2, trade analyst Taran Adarsh. Sanju's current total at the box office stands at Rs 120.06 crore. Box office had welcomed Ranbir's film with a 'jaadu ki jhappi' and on Day 1, Sanju had garnered a whopping Rs 46.71 crore, making it the biggest opening of 2018. "Sanju creates history. Records highest single day for a Hindi film. Demolishes the record held by Baahubali 2 [Hindi].Baahubali 2 had collected Rs 46.50 crore on Day 3 [Sunday]... Sanju has surpassed it, collects Rs 46.71 crore on Day 3 [Sunday]," Taran Adarsh wrote.

Sanju has emerged as the highest-opening weekend grosser of 2018, toppling the collections of films like Race 3 and "Padmaavat." Also, Sanju has surpassed the three-day opening weekend business of Tiger Zinda Hai, which stands at Rs 114.93 crore.

Ranbir Kapoor's last release was Anurag Basu-directed film Jagga Jasoos, which did not do well at the box office. Sanju has also become Ranbir Kapoor's highest opening day grosser of his films so far.

Promoted
Listen to the latest songs, only on JioSaavn.com
Sanju opened at the theatres on Friday to positive reviews. In review for NDTV, film critic Saibal Chatterjee gave Sanju 4 stars out of 5. "Ranbir Kapoor, slipping into the skin of the troubled Bollywood star, pulls out the stops in astonishingly effective ways, subsuming his own personality completely into that of the protagonist. The director is on the top of his game and the actor frequently soars to dizzying heights. Sanju, as a result, is an entertainer that delivers more than just the superficial goods that one expects from a mass entertainer. It sets a new benchmark for Bollywood biopics. It will be a hard act to follow.

Sanju is a biopic based on the life of Sanjay Dutt. Directed by Rajkumar Hirani, Ranbir Kapoor plays the protagonist in the film. Vicky Kaushal, Paresh Rawal, Manisha Koirala, Sonam Kapoor, Jim Sarbh, Anushka Sharma and Karishma Tanna are also part of the film.