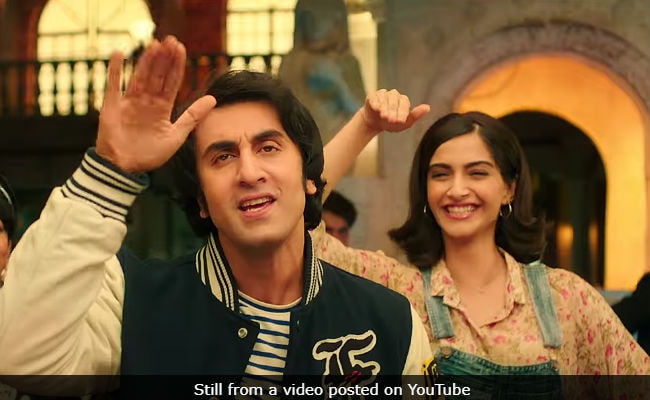 Ranbir Kapoor and Sonam Kapoor in a still from Sanju. (Image courtesy: YouTube)

New Delhi: Ranbir Kapoor as Sanjay Dutt in the biopic on the latter is trending again - this time for the first song from Sanju, which is titled Badhiya. The first song from the Rajkumar Hirani-directed film is dictating the trends list on Sunday. The pleasant track, sung by Sonu Niggam and Sunidhi Chauhan, also features Sonam Kapoor and serves as a refresher course on the Bollywood of the 80s. The song begins with Ranbir (as Sanjay Dutt) all set to prove to his father that he can lip-sync. And Ranbir Kapoor does that well. The song, it seems, is part of the time when Sanjay Dutt was preparing for his Bollywood debut under his father Sunil Dutt's (played by Paresh Rawal in the film) watchful eyes.

Sanju is based on actor Sanjay Dutt's life and covers his phase of drug addiction, rise to stardom and fall, his tryst with the law in the 1993 Bombay blasts case, his jail term and a brief discussion of life after jail. Rajkumar Hirani and Ranbir Kapoor have reiterated that the film's primary focus is Sanjay Dutt's relationship with his father Sunil Dutt, who stood by him as a rock through his tough phases.

Speaking about Sanjay Dutt and his portrayal of the Munna Bhai actor, Ranbir Kapoor told IANS that he "really wants" Sanjay Dutt to like him. "I know I never can be the man he is, but... I really want Sanju sir to like me. I hope that he feels that I have represented his life in very honest and improved way."