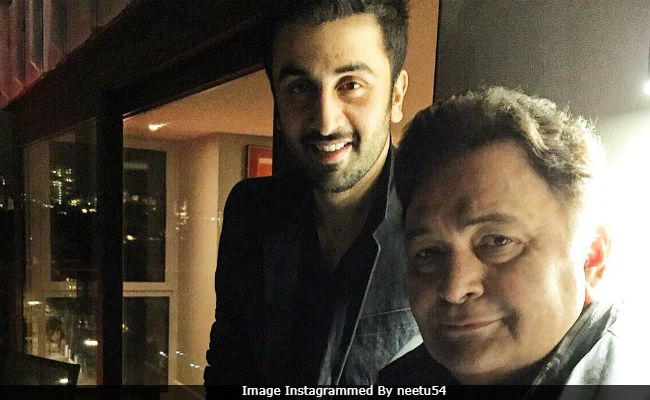 New Delhi: Ranbir Kapoor's father Rishi Kapoor had watched the trailer of Sanju ahead of its official release and had all praises for his performance in the film. Rishi Kapoor had said that he 'didn't realise it was Ranbir in the trailer and thought it was Sanjay Dutt.' Of his father's compliment, Ranbir said it really made him 'emotional' as he doesn't really say all these things after watching his films. "Besides being my father, he is also an actor I really admire and respect... He never tells me to my face that I've done good work, not that I expect it either. But when you hear such words coming from him, it is incredible, it really moved me, made me emotional," Ranbir Kapoor said at the trailer launch of Sanju, reports news agency PTI.

"Every father wants their son to do well, but my father is very careful that he won't give compliments for free. He always tells us kasar reh gayi hai, work harder (There is still scope for improvement, work harder)'. This was a wonderful gift," Ranbir said.

In Sanju, Ranbir plays actor Sanjay Dutt and the film is based on his life. The trailer released today and it's already a hit. "Rajkumar Hirani has presented Ranbir is the biggest superb thing. The boy has really done well. I am so proud of him. I swear on Neetu and Ranbir, I did not think it was Ranbir, I thought it was Sanjay Dutt," was what Rishi Kapoor said after watching Sanju trailer.

Here's the much-talked about trailer of Sanju.

Meanwhile, Ranbir added that his mother Neetu is his 'biggest fan.' "My mother is my biggest fan, whatever I do she loves. When she saw Bombay Velvet she thought it was the greatest film in the world," he told PTI.