"I want to congratulate Dr Dhere and his entire team for doing such a wonderful job!" wrote the actor 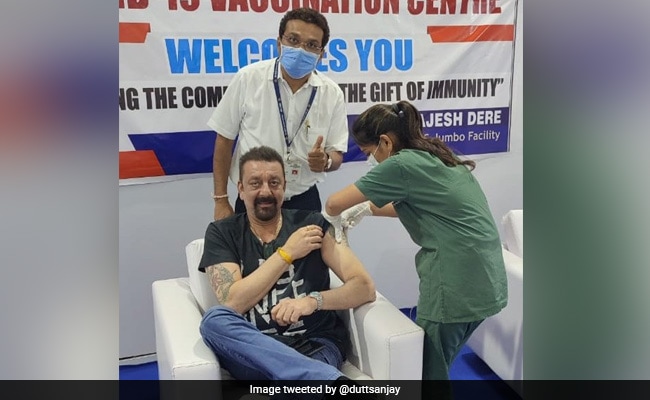 Actor Sanjay Dutt got his first COVID-19 vaccine shot in Mumbai on Tuesday. Sanjay Dutt, 61, posted a picture of himself receiving the shot at the BKC vaccine centre on social media and congratulated the doctors for "doing a wonderful job." Sanjay Dutt is the latest addition to the list of celebs who have received the first dose of the COVID-19 vaccine. In his tweet, the actor wrote: "Received my first shot of the COVID-19 vaccine today at the BKC vaccine centre. I want to congratulate Dr Dhere and his entire team for doing such a wonderful job! I have so much love and respect for them and their hard work. Jai Hind!"

Received my first shot of the COVID-19 vaccine today at the BKC vaccine center.
I want to congratulate Dr. Dhere and his entire team for doing such a wonderful job! I have so much love & respect for them & their hard work. Jai Hind! pic.twitter.com/LcSNoAsf0G

Last year, Sanjay Dutt had taken a minor break from work because of his health condition in October. He battled cancer and resumed work a month later.

In an Instagram post, he wrote on October 21, "The last few weeks were very difficult time for my family. But like they say, God gives the hardest battles to his bravest soldiers. And today, on the occasion of my kids' birthday, I am happy to come out victorious of the battle and be able to give them the best gift I can - the health and well-being of our family." He was undergoing treatment at Mumbai's Kokilaben Hospital.

The actor will next be seen in KGF: Chapter 2, a sequel to blockbuster KGF. He also has Bhuj: The Pride Of India and Prithviraj lined up.