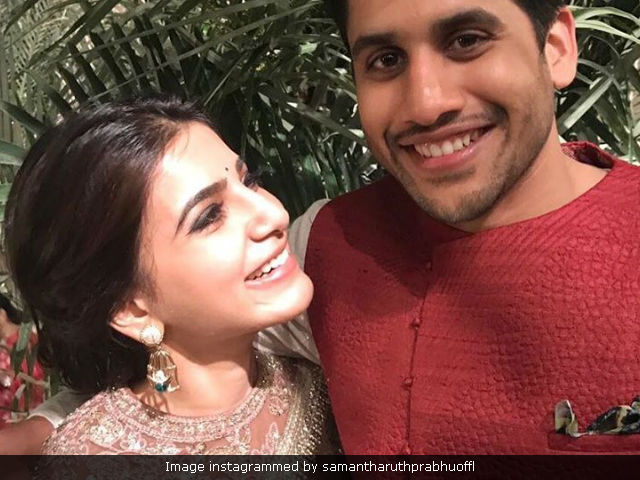 New Delhi: Actress Samantha Ruth Prabhu latest Instagram post which also features her boyfriend, actor Naga Chaitanya, is one of Thursday's top trends. The video is titled "Koecsh by Kresha Bajaj for Samantha Prabhu." It is shot in time lapse style which shows figures of Samantha and Naga Chaitanya being embroidered by two people on a piece of fabric. Samantha shared the video on Instagram and wrote: "From the pages of my story.. to you with love (sic)." Samantha and Naga Chaitanya are reportedly getting engaged this month, according to a Deccan Chronicle report. A source told the daily that the couple will get engaged on January 29.

Take a look are Samantha's video which is the talk of the town:

From the pages of my story .. to you with love

A video posted by Samantha Ruth Prabhu (@samantharuthprabhuoffl) on Jan 25, 2017 at 7:22pm PST

Kresha Bajaj is a designer who own fashion label Koecsh, which specializes in custom made bridal lehengas. Kresha is also an expert in designing lehengas which depict the love story of the respective bride and groom. In fact, she designed one such spectacular couture for her own wedding. She married Vanraj Zaveri in March, last year and had her own love story embroidered on her wedding lehenga. Take a look:

A moment from my proposal in Maldives embroidered into the kali, finished with a hem of jumping dolphins! And, when you look close enough, you see the random chevron is a repeat of our names... To know more, check out the link in bio @koecsh #weddingdiaries @guiseppezanottiworld @vanrajzaveri #VanGoneKre #love #magic The House Of Pixels

So is the video Samantha shared on Instagram a glimpse of her lehenga for her engagement or wedding?

Promoted
Listen to the latest songs, only on JioSaavn.com
Last year in December, Naga Chaitanya's brother Akhil Akkineni got engaged to designer Shriya Bhupal in an elaborate ceremony in Hyderabad. Both brothers are reportedly planning a destination wedding.