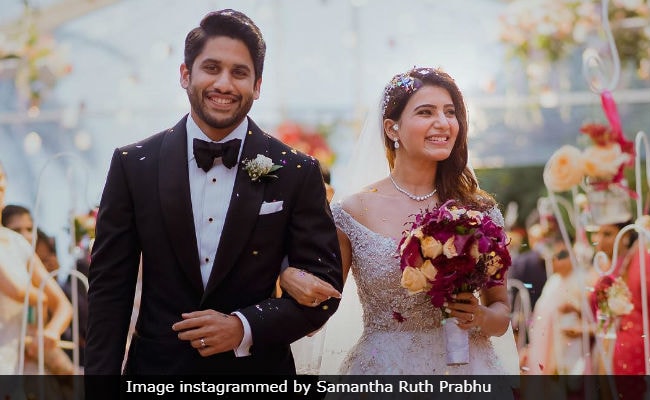 Samantha and Naga Chaitanya in a picture from their wedding in Goa. (Image courtesy: Instagram)

New Delhi: Samantha Ruth Prabhu gave her Instafam the best possible Sunday treat. She shared a video, which has glimpses of her and Naga Chaitanya's wedding, which took place in Goa in October 2017. "As promised Letting you in #chaysam," she captioned the post. The video has several BTS moments of Samantha and Naga Chaitanya's fairy tale wedding. Like in any other wedding, there were glitches - like when the groom couldn't find his tie before the wedding and Samantha's bridesmaid were nowhere to be found. But they laughed and smiled and eventually everything went smoothly. The video has snippets from what appears to be a sangeet function where Samantha danced her heart out. It also shows how the bride and groom tackled their nervousness and smiled away.

Watch the never-seen-before video from Samantha and Naga Chaitanya's wedding:

As promised Letting you in #chaysam . Thankyou @storiesbyjosephradhik you guys are the best in the country . #weshouldallbelieveinfairytales

A post shared by Samantha Akkineni (@samantharuthprabhuoffl) on Jun 10, 2018 at 2:04am PDT

Samantha Ruth Prabhu and Naga Chaitanya met on the sets of 2010 film Ye Maaya Chesave and fell in love. The couple dated for seven years before getting married in October last year. Earlier this year, Samantha and Naga Chaitanya were in New York and Samantha shared a selfie from the Central Park, "where it all began 8 years ago..."

Usually hate selfies but this had to be done .. Central Park .. where it all began . 8 years ago.. Thankyou for the magic ..just had to come back and say Thankyouuu #whatsmeanttobewillbe #lovewillfindaway #NewyorkNewyork #familyiseverything #chaylove #happilyeverafter #YMC

A post shared by Samantha Akkineni (@samantharuthprabhuoffl) on Mar 31, 2018 at 3:52pm PDT

After the wedding in October, Samantha has featured in four hit films Raju Gari Gadhi 2, Mersal, Rangasthalam and Mahanati, in which Naga Chaitanya had a cameo role. Naga Chaitanya's upcoming film is Savyasachi, co-starring R Madhavan.