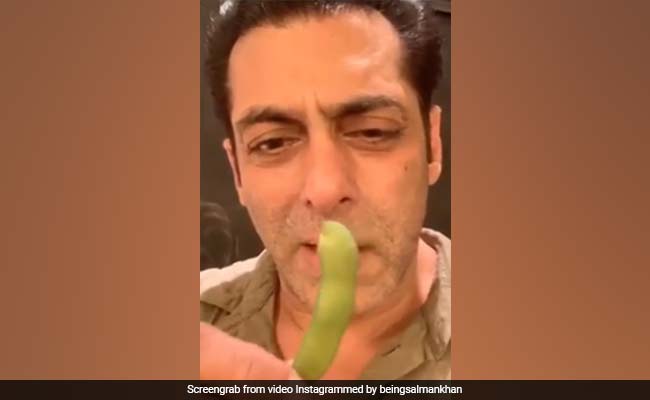 A still from the video shared by Salman Khan. (Image courtesy: beingsalmankhan)

Salman Khan is the new comedy king on Instagram and his latest post proves it. The actor added another hilarious video to his Instagram diaries, in which he can be seen complaining about his "mami" to his Instafam. Before you read further, we must tell you Salman's "mami" is a little hatke. Sharing the video, Salman wrote: "Meri mami parayi ho gayi, she has lost the plot or is it just me?" If you are wondering why Salman Khan is talking about his "mami", here's what he said in the video: "Toh ek meri mami hai, jab se uska naam English mai pada, naam Hindi ka the... Usne apna naam English mai convert kr diaa. Uske dimag kharab ho gaye aur price badh gaye. Mai apko meri mami se milwata hu... Edamame... Iska naam waps se Hindi mai leke aao."

Yes, you read it right. The 53-year-old actor is talking about Edamame, a type of soy bean that is harvested early. It can be eaten alone, as a snack, or in soups and other dishes. It is an excellent source of protein, iron, and calcium.

Salman's epic video is breaking the Internet and the one lakh likes on Instagram in just 20 minutes proves it.

Excited much? Check out the video:

Meri mami parayi ho gayi, she has lost the plot or is it just me..

Meanwhile, also check out Salman Khan's other videos that will make you giggle.

On the work front, Salman Khan have many films lined-up such as Dabangg 3 and Inshallah.