In the clip, Salman can be seen making a "post" in an "old fashioned way." 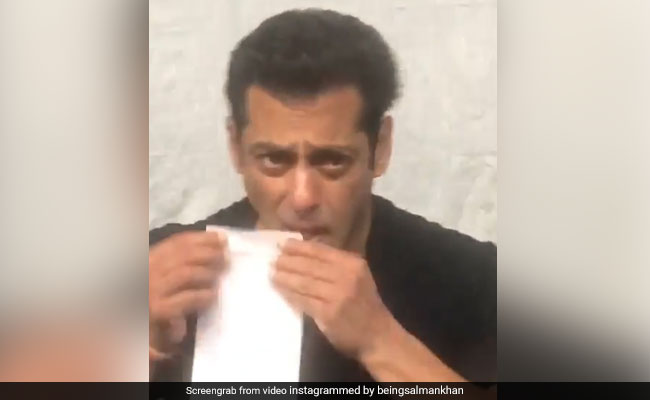 Salman Khan in a still from the clip. (Image courtesy: beingsalmankhan )

Salman Khan is back with another quirky Instagram video and it will surely leave you in splits. The actor kind of redefined Instagram posts in his recent video. In the clip shared by the Bharat actor, in which he is sporting a black t-shirt, he can be seen literally making a "post" in an "old fashioned way." LOL. The post in the video is an envelope, which is generally used to physically transport letters or packages. Sharing the video, Salman Khan captioned it: "Posting the old fashioned way..." The video made not only us giggle but actress Preity Zinta also couldn't stop laughing (more on that later). First, take at the video, which received over one million likes on Instagram.

This is not the first time that the actor has made us giggle with his witty posts. Earlier, Salman shared a video in which he nailed the Bottle Cap Challenge. The viral video starts with Salman prepping to unscrew the bottle lid and then he comes closer to the bottle and blows the lid off. That's Salman's style! He accompanied his post with a hilarious caption: "Don't thakao paani bachao."

Also, in one of his previous posts, he shared a video in which he can be seen offering a bottle of water to a monkey. He captioned it: "Hamara bajrangi bhaijaan plastic ki bottle se paani nahi peeta ..."

On the work front, Salman Khan is busy shooting for his work-in-progress film Dabangg 3. He will also share screen space with Alia Bhatt in Inshallah.