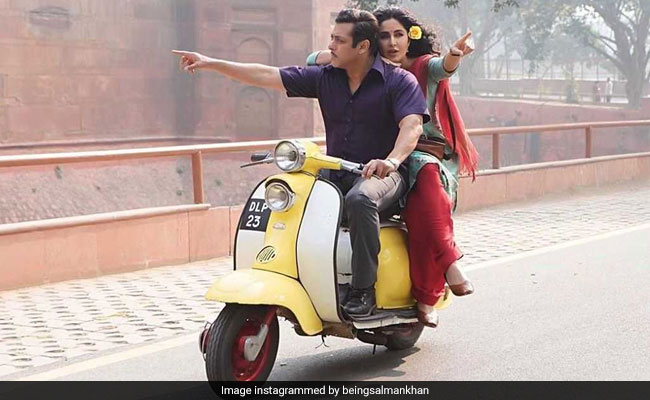 Salman Khan with Katrina Kaif in a still from Bharat. (Image courtesy: beingsalmankhan)

Katrina Kaif turned 36 today and she did it in style. The actress is busy celebrating her birthday in Mexico, but her closest friends, colleagues and fans have bombarded the social media with birthday wishes for her. One such wish came from Katrina's Bharat co-star Salman Khan. The 53-year-old actor shared a still from the film, in which he and Katrina could be seen seated on a scooter. Salman captioned the post: "Happy birthday Katrinaaa..." As of now, Katrina hasn't reacted to Salman's post but we are eagerly waiting for her reaction to his post. Meanwhile, fans flooded the comments section with birthday wishes for the actress and over 5 lakh people have liked the picture on Instagram.

Take a look at Salman Khan's wish for Katrina here:

Katrina and Salman share a great rapport and frequently make appearances on each other's Instagram profiles. After the wrap of Bharat, Katrina wrote an extensive note for Salman and the film's director Ali Abbas Zafar. "And that's a picture wrap on Bharat. It's been the most incredible and exciting character for me, the whole process of making this film has been so inspiring... Thank you Ali Abbas Zafar and Salman Khan - the bestest boys and Alvira khan ( the bestest girl)," wrote Katrina Kaif.

And that's a Picture wrap on Bharatits been the most incredible & exciting character for me, the whole process of making this film has been so inspiring .....thank u @aliabbaszafar and @beingsalmankhan @atulreellife ..the bestest boys and Alvira khan ( the bestest girl)

Salman Khan introduced Katrina Kaif in Bollywood and they were said to be dating for a few years. The duo have co-starred in films such as Ek Tha Tiger, Tiger Zinda Hai, Maine Pyaar Kyun Kiya and Partner among others. That's not, Salman even made guest appearances in several films which featured Katrina.