Salman Khan Gets An Urvashi Dance Lesson From Prabhu Deva Himself. How Did He Do?

Salman Khan and Sudeep lined up as Prabhu Deva taught them the basic dance moves of Urvashi. 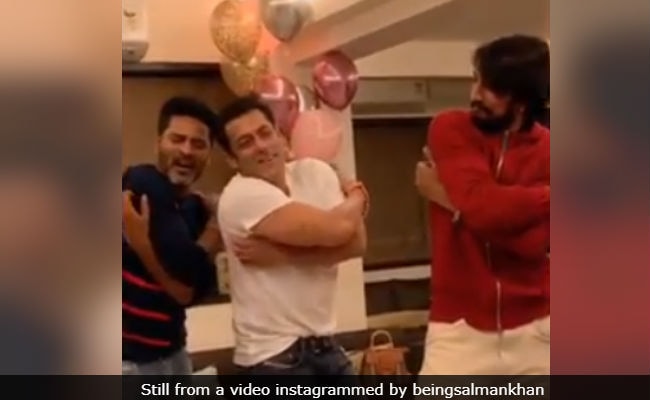 Prabhu Deva, director of upcoming film Dabangg 3, conducted an impromptu dance class for his lead star Salman Khan, antagonist Sudeep and the film's co-producer Sajid Nadiadwala at a recent house gathering. Salman, Sajid and Sudeep lined up as Prabhu Deva taught them the basic dance moves of Urvashi, one of his many popular tracks, from 1994 film Kadhalan (Humse Hai Muqabala in Hindi). The Dabangg quartet nailed the hook step of the song. "Dance class from the master himself... Prabhu Deva," Salman Khan captioned the post, which has over 2.6 million views as of now. Salman Khan is reuniting with Prabhu Deva for Dabangg 3, 12 years after they made Wanted together. Prabhu Deva also choreographed Salman Khan in Wanted's popular track Dhinka Chika and the actor's lazy dance moves were a rage back then.

But for now, take a look at Salman Khan dancing to Urvashi with his Dabangg team:

Dance class from the master himself . . Prabhu Deva @kichchasudeepa @wardakhannadiadwala

Dabangg 3, the third in the Dabangg series, is produced by Salman's brother Arbaaz Khan, who also directed the second film of the franchise. Speaking about taking over the Dabangg series, Prabhu Deva told PTI, "Challenges are there, but you have to put in hard work. People expect more. We try to give more. So, there is hard work."

Dabangg 3 went on floors earlier this year and a significant portion of the film was shot in Maheshwar, including the film's title track Hud Hud Dabangg.