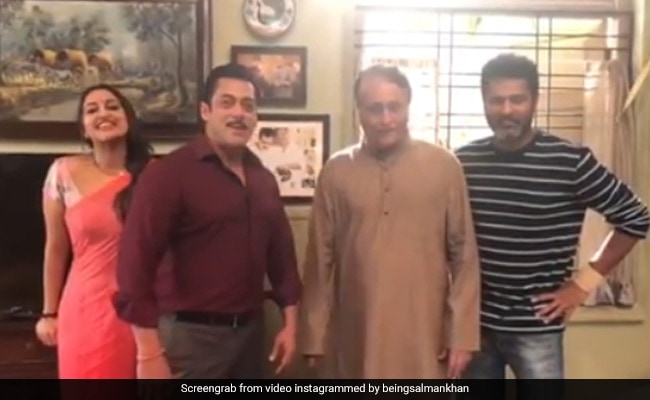 Salman Khan, who was last seen in Bharat, shared an update about his work-in-progress film Dabangg 3, which is the third part of the Dabangg series. The 53-year-old actor on Thursday announced his on-screen dad in quite a style on his Instagram profile. Yes, we are talking about Chulbul Pandey's father Prajapati Pandey, who was earlier played by late actor Vinod Khanna. However, for Dabangg 3, Vinod Khanna's brother Pramod Khanna will get into the veteran actor's shoes and will soon start shooting for the film with Salman Khan. Sharing a video, which also features the film's lead actress Sonakshi Sinha, director Prabhudeva and Pramod Khanna, Salman Khan wrote: "Introducing Pramod Khanna ... #Dabangg3." Veteran actor Vinod Khanna, who passed away in 2017, played the role of Prajapati in both Dabangg (2010) and Dabangg 2 (2012).

The video begins with Salman Khan and Vinod Khanna's photo frame and later the camera is panned at Pramod Khanna, who introduces himself as Prajapati Pandey.

A couple of days ago, Sonakshi Sinha, who will reprise her role as Rajjo in Dabangg 3, said that there will be no love triangle in the film. "No... Speculations will be there, but of course, there will be a different story and this film will have new characters as we don't want to offer same stuff to our audience," she said at an event, reported news agency IANS.

Dabangg 3 went on floors earlier this year and it is set to hit screens on December 20 this year.