"Dad's got your back and I got your front but don't fly too high," wrote Salman Khan 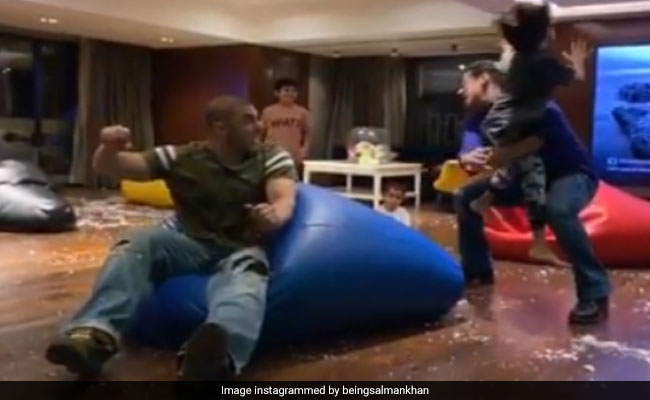 A still from the video shared by Salman Khan (Courtesy: beingsalmankhan)

The Internet loves Salman Khan's birthday post for his nephew Yohan, all of eight today. Yohan, son of Salman's brother Sohail and Seema Khan, found himself trending on Twitter after Salman's hilarious video captioned: "Happy birthday Yohan. Dad's got your back and I got your front but don't fly too high." The video is an ROFL masterpiece of brotherly coordination - Sohail jumps onto a bean bag, bouncing Yohan off it and straight into Salman's arms, all slo-mod rather aptly to Slow Motion from the soundtrack of Salman Khan's new film Bharat. The video is every bit fun as it sounds.

Hahahahahahahah these are the most fun siblings I've EVER met !!
HBD Yohan https://t.co/zQIvSLrDnS

Sohail Khan and designer Seema Sachdeva got married in the year 2008 and parents to two sons, Nirvaan and Yohan. Sohail Khan has acted in films such as Maine Pyaar Kyun Kiya? , Fight Club - Members Only, Veer and Tubelight. He had a cameo in the filmLoveYatri, which featured Aayush Sharma and Warina Hussain, which released last year. Sohail Khan has also directed and produced several films.

Meanwhile, Salman Khan recently starred in Bharat, which is an adaptation of 2014 South Korean film Ode To My Father. The film is directed by Ali Abbas Zafar and co-stars Katrina Kaif, Disha Patani, Tabu and Jackie Shroff. Salman Khan is currently busy shooting for his next film Dabangg 3.