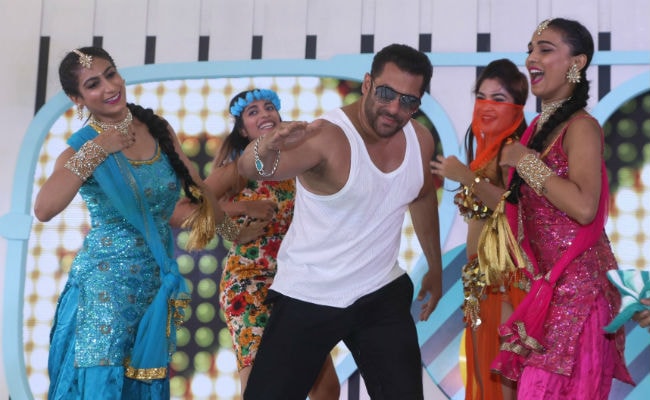 Salman Khan performs at the launch of Bigg Boss 12 in Goa.

Salman Khan, who returns as the host of reality show Bigg Boss for the 12th season, revealed that he was initially "scared" of doing TV shows, reports news agency PTI. Speaking to media at the launch of Bigg Boss 12 in Goa, Salman Khan said: "I was scared to do TV because I was in and out of jail. There were so many controversies and here I was showing my real self on television." Salman Khan is currently hosting 10 Ka Dum season 3 and starting September 16, he will be seen as host on Bigg Boss 12. "Whenever I am there on TV, it is the real Salman. There is no pretence. There is no dialogue baazi. Whatever experiences I have had in my life, I share with people," PTI quoted Salman Khan as saying.

Salman Khan also revealed that he eventually gave green signal to the small screen on his writer father Salim Khan's advice. Salmna khan said: "I shared my concerns with dad and he said, 'You improvise for your characters and they are different from you. But this is your own personality. Do you think you have any malice in your heart or you are some twisted person? He said, 'Go and show the world how you are in real. How you are with us, your siblings and your friends.' (After that) I felt it is okay to share my personality with viewers," reports PTI.

Salman Khan added that it's impossible to fake on camera: "Camera has the power to catch if you are a fraud. You can fool people for some time, but you can't fool all the people for all the time. It will come out one day. One may try hard to hide their real self, but it is impossible. You have to be yourself, otherwise people won't be able to relate with you and then there is no success."

Salman Khan has hosted Bigg Boss season 4 onwards, though Sanjay Dutt joined his as co-host in season 5 and filmmaker Farah Khan briefly filled in for him to host the extended version of Bigg Boss 8, which was called Halla Bol.