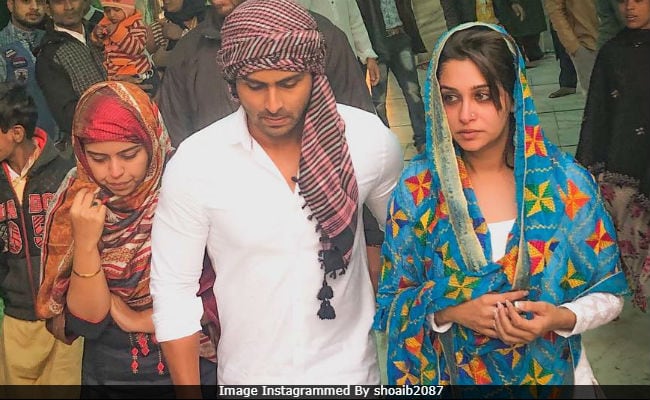 Actress Dipika Kakar, who won the reality show Bigg Boss 12, recently visited Ajmer Sharif with husband Shoaib Ibrahim and sister-in-law Saba to offer her prayers at Khwaja Moinuddin Chishti's shrine. "To thank him for all that he has showered upon us," read Dipika's caption for a picture she posted from the dargah while Shoaib wrote in Hindi, "Irade roz bante hai aur bankar tut jate hai, wahi Ajmer aate hai jinhe Khwaja Sahab bulate hain." Dipika wore a white salwar kameez with a blue dupatta while Shoaib was casually dressed. Here are the pictures from Dipika Kakar and Shoaib Ibrahim's Ajmer Sharif visit.

Dipika Kakar was named the winner of Bigg Boss 12, hosted by Salman Khan, in December. She took home the Bigg Boss 12 trophy, along with the prize money of Rs 30 lakh. Dipika competed for the trophy with former cricketer S Sreesanth.

we did it!!!!! thers nothing above being honest to yourself in any and every walk of life... and that is what has made us win hearts and achieve this!!! Dil se thank you to everyone who has supported me... all the fans who have showered immense support and love..it has been a journey with a lot of ups n downs not just for me but even for my loved ones outside... lot of criticism faced and lots of memories created!!! This trophy is from you all for you all.. lots of love and a happy new year to all #stayblessed Outfit :- @kalkifashion Jewellery :- @adan_creation_ #dipikakakaribrahim #bb12 #colorstv @colorstv @endemolshineind @viacom18 #dipstars

Earlier this month, Sreesanth visited Dipika and Shoaib along with his entire family. Take a look at the pictures from their meeting here.

Dipika Kakar is best-known for her role Simar in the TV show Sasural Simar Ka, which also starred Shoaib. The couple fell in love on the sets of Sasural Simar Ka. Shoaib quit the show soon while Dipika played the lead for several years. The couple were later seen together in Nach Baliye. Dipika debuted in the film industry with JP Dutta's Paltan while Shoaib's first Hindi movie Battalion 609 released recently.