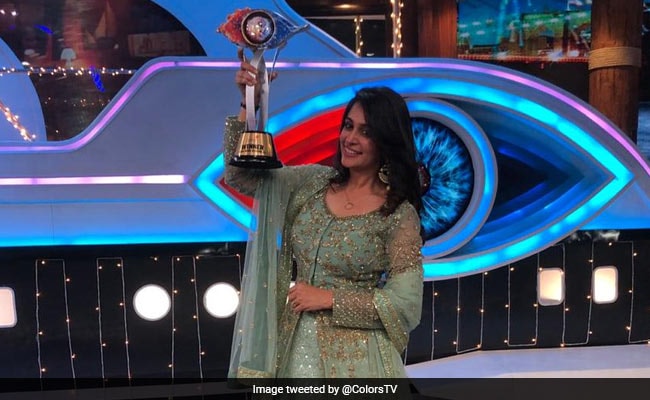 Congratulations, Dipika Kakar for the big win! TV actress Dipika Kakar was declared the winner of Bigg Boss 12 by Salman Khan on the grand finale of the show on Sunday night. Ahead of the big announcement, Dipika Kakar and Sreesanth, whose bonding on the show made headlines, found themselves as the top finalists on the show. While Dipika Kakar celebrated her big win with the Bigg Boss 12 trophy and the prize money of Rs 30 lakh, Sreesanth turned out to be the runner up of the show. Apart from Dipika and Sreesanth, Romil Chaudhary, Karanvir Bohra and Deepak Thakur were also formed the top five list of finalists. In an interesting twist on the grand finale of Bigg Boss 12, the top three contestants - Dipika, Sreesanth and Deepak - were given the chance to leave the finale with a chunk of the prize money (Rs 20 lakh) and Deepak was the one to go home with it.

Deepak Thakur, who had the least votes amongst the top three finalists, hit the buzzer to claim Rs 20 lakh from the prize money, which is the biggest exit money across all seasons of Bigg Boss.

The grand finale of the show opened with the finalists being congratulated by Bigg Boss for making it to the top - they raised a roast and popped the champagne! Ahead of the winner announcement, what led to the cliff-hanging moment was a blockbuster episode with Salman Khan joining the finalists inside the house for stellar performances to his songs, just like every year. With Dipika Kakar and Sreesanth, Salman danced to the title song of Partner and Character Dheela.

#BB12GrandFinale will definitely make you go gaga over @BeingSalmanKhan and @sreesanth36 all over again. Make sure to watch their awesome performance tonight at 9 PM! #BB12#BiggBoss12@iamappyfizz@oppomobileindia@TheGarnierMan@letsdroompic.twitter.com/xKEa0BtIfu

Sreesanth and Dipika Kakar, who stood by each other through the show, enacted their real life rapport through an act of performance to the songs Yeh Ladka Hai Deewana and Tu Jo Mila.

.@sreesanth36 and @ms_dipika's adorable relationship truly won countless hearts and their dance performance truly is the accurate representation of their ups and downs! #BB12#BiggBoss12#BB12GrandFinale#BiggBoss12Finalepic.twitter.com/EDe63SfXZR

Meanwhile, Romil Chaudhary, Sreesanth and Karanvir Bohra also had a dance-off of sorts on the show and set the stage on fire to Khali Bali. Somi Khan and Deepak Thakur also performed to romantic numbers.

#SomiKhan and #DeepakThakur get together for a romantic performance and it's absolutely beautiful! Are you watching this spectacular moment? #BB12#BiggBoss12#BiggBoss12Finalepic.twitter.com/wJGPLhMTqB

Ahead of the announcement, the tensed atmosphere on the show was diffused with the entry of comedienne Bharti, who delivered a cute performance to Dil Diyan Gallan along with Salman Khan. Bharti also left the audience in splits as she hilariously joked about her matrimonial offer to Salman Khan.

Bigg Boss 12 kick-started with Salman Khan returning to host the show in September this year and wrapped with the finalists surviving 105 days inside the house.