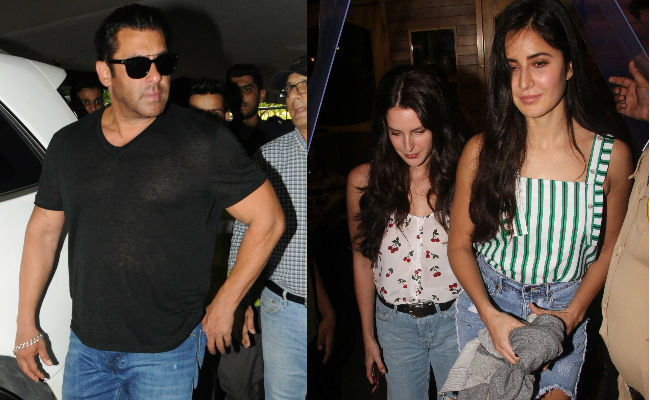 Salman Khan (L) at the airport. Katrina with Isabelle (R) outside a Mumbai restaurant.

New Delhi: Salman Khan is apparently too busy to feature in Katrina Kaif's sister Isabelle's Bollywood debut film. According to a mid-day report Salman opted out of a special dance sequence from upcoming film Time To Dance. The 52-year-old actor, who was filming Race 3 in Ladakh recently, now wants to focus on his upcoming Da-Bangg tour and the Ali Abbas Zafar-directed Bharat. In Time To Dance, Isabelle plays the role of a ballroom dancer while Sooraj Pancholi (the film's hero) is a street dancer. A source told mid-day: "The protagonists will be seen performing various dance styles including waltz and Tango. Salman is not comfortable with these dance forms. Also, he wants to focus on his Da-Bangg Tour, and then, Bharat. Since the movie will demand most of his time, Salman decided to bow out of the commitment."

Salman Khan launched Isabelle Kaif in Canadian film Dr Cabbie, which released in 2014. He's also co-producing Time To Dance, which went on floors in London in April. The film is directed by Stanley D'Costa.

Promoted
Listen to the latest songs, only on JioSaavn.com
Salman Khan is neck-deep in work with the upcoming tour and post-production work of Race 3, which opens in theatres on Eid. Ali Abbas Zafar is scouting for locations for Bharat, which is a remake of Korean film An Ode To My Father. Once that's done, Salman Khan will start filming Bharat. The film also stars Priyanka Chopra (her first film after 2016's Jai GangaaJal).