In the viral video, Salman Khan can be seen interrupting what appears to be a live show that Iulia Vantur was part of 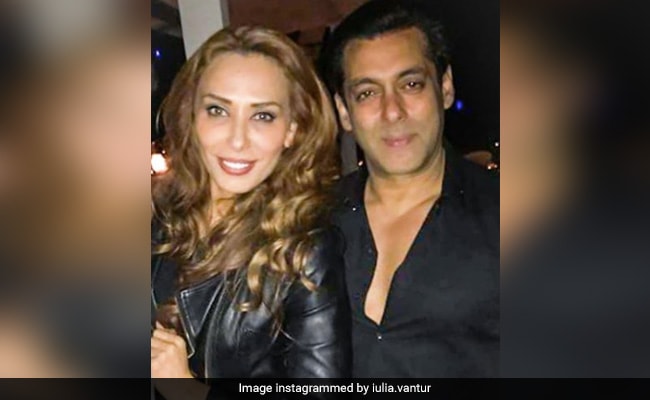 Salman and Iulia Vantur in a still from the video (courtesy iulia.vantur)

Salman Khan, who is rumoured to be dating Romanian television presenter Iulia Vantur, plonked himself on the trends list recently because of a viral video. The 54-year-old actor, who is staying at his farmhouse in Panvel during the lockdown, has been constantly alerting his fans about the dos and don'ts of coronavirus but his social media fans found something else a lot more interesting. In a video, which has resurfaced on the Internet, Salman Khan can be seen interrupting what appears to be a live show that Iulia Vantur was part of. In the short clip, Salman can be seen entering the frame while Iulia is in conversation with someone on the show. Iulia quickly asks Salman to move away and then face-palms moments later.

Salman Khan and Iulia Vantur carefully avoid being spotted together in social media posts, events and parties. But Iulia has always been part of the Khans' family gatherings and social events. In December last year, Iulia attended the star-studded screening of Salman Khan's Dabangg 3, ahead of which she was part of Arpita Khan Sharma and Aayush Sharma's anniversary celebrations. Iulia was also Salman's plus-one at his ex-girlfriend Sangeeta Bijlani's birthday party. Meanwhile, Iulia has been shared these glimpses from Salman Khan's Panvel farmhouse.

What are u grateful for today? I'm grateful for #thesun #thenature Now even more #blessing #goodfriday #love #life #iuliavantur

Salman Khan has been frequently appearing on Instagram to post a few "stay home, stay safe messages." He recently trended a great deal for a video of him sharing breakfast with his "love" - his horse.

Salman Khan was last seen in Dabangg 3 and was shooting for his next Radhe when the lockdown was imposed.