"Yes, the cops cleared the paparazzi because someone complained. Not me," said Saif Ali Khan 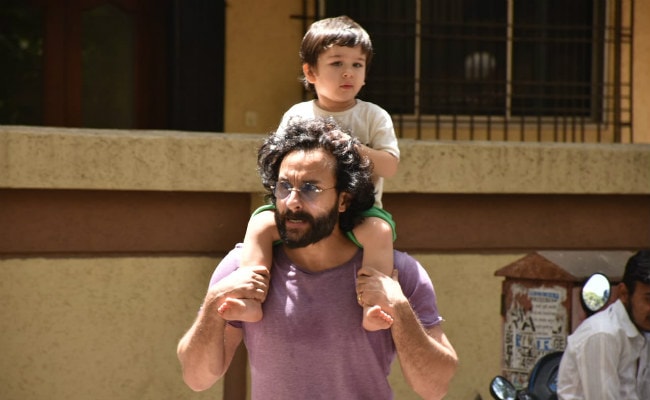 Saif Ali Khan recently clarified certain reports that stated he asked the cops to intervene and clear out the paparazzi waiting to spot Taimur outside his Mumbai home. Speaking to news agency IANS, the 48-year-old actor denied having called the cops himself but stated his deep concern for the growing paparazzi obsession over Taimur: "Yes, the cops cleared the paparazzi because someone complained. Not me. I can't say I feel kindly about their presence, because 10 people lounging about outside your house waiting for a shot of your kid is disturbing to say the least. I didn't complain because I don't want to deprive anyone of a job."

Last week, the otherwise calm and composed Saif Ali Khan appeared snapped at the camerapersons following his family at close heels at the airport, after which it was reported that shutterbugs are miffed with the actor's behaviour. But the actor said while he understands that the camerapersons are simply doing their job, his two-year-old son must be left out of the media glare. Requesting the photographers, Saif said: "Please don't stalk Taimur. He is not a star. He is just a child."

Saif Ali Khan, who never appears to be perturbed by the presence of shutterbugs around him, told certain photographers: "Bas karo yaar, bachcha andha ho jaayega (Stop it, the child will go blind)," as they incessantly popped the flashbulbs while Saif was on his way to the airport gates with Kareena Kapoor and Taimur. When the paparazzi requested Saif and Kareena to pose, he said: "Aap ko lena hai toh lo, ye pose karna thoda ajeeb hai (You want to take photos, you take them, it's weird to pose)," reported IANS.

The paparazzi caters to Taimur's massive popularity on social media, about which, Kareena appears to have made peace with but she said, as a mother, all she hopes for Taimur to have a "normal life." In several interviews and shows, both Saif and Kareena said while they can the craze around being a celebrity, they want Taimur to be left out of the attention.

In a recent interview to Pinkvilla, Saif Ali Khan said: "I believe I am well within my right as a father to choose to not pose for the cameras when I have my son with me or to inform the photographers that the constant flashes can hurt his eyes. As media figures, we have to live with the attention and we accept that. But our kids shouldn't be subjected to it."

Taimur will celebrate his third birthday in December this year.