Saif Ali Khan and Kareena Kapoor lost their way after taking a wrong turn to the Pataudi Palace. 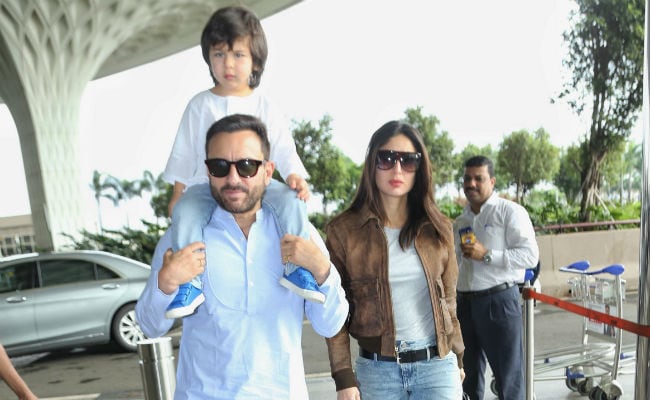 Saif Ali Khan with Kareena and Taimur at the Mumbai airport.

Saif Ali Khan and Kareena Kapoor along with their son Taimur are currently in Pataudi, where they'll celebrate the Tashan actress' 39th birthday on Saturday. However, before the family of three could arrive at Saif's ancestral Pataudi Palace, they lost their way after taking a wrong turn and had to ask locals to help them figure out the route, reports Mumbai Mirror. On Thursday, Saif, Kareena and Taimur hired a cab from the airport to Pataudi and after taking a wrong turn, they arrived at a local market realising they had lost the way.

Saif Ali Khan and Kareena Kapoor frequently visit the Pataudi Palace for a quiet getaway from the hustle-bustle of Mumbai city. Earlier, they celebrated Taimur's birthday at the Pataudi Palace, for which Kareena's sister Karisma and her children Samaira and Kiaan also joined them. Saif and Kareena have hosted their extended family members including Karan and Kunal Kapoor (sons of Shashi Kapoor).

On the work front, Saif Ali Khan, who was last seen in critically-acclaimed Sacred Games 2, has Laal Kaptaan, Dil Bechara, Jawaani Jaaneman and Taanaji: The Unsung Warrior in the pipeline.