Little Taimur, who will celebrate his third birthday in December, accompanies not only Kareena to work but also dad Saif Ali Khan to his shoot sets. 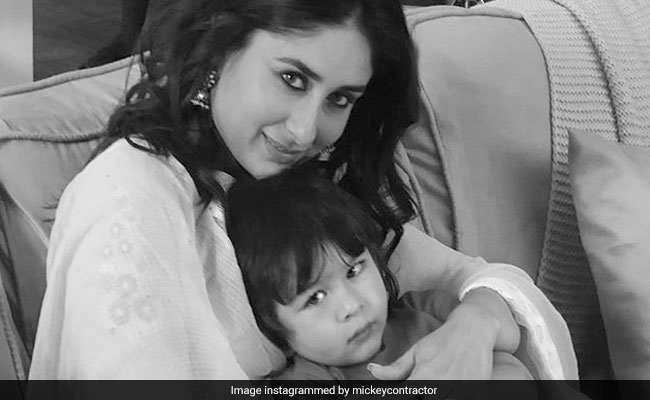 Kareena and Taimur in an adorable photo (courtesy mickeycontractor)

Busy star Kareena Kapoor had a special visitor at work on Tuesday and no points for guessing that it's none other than Taimur. The two-year-old accompanied Kareena to the sets of what may have been an advert shoot and landed directly on his favourite lap - Kareena's. Celebrity make-up artist Mickey Contractor captured the adorable mother-son moment and Instagrammed it with fans and followers, saying how Taimur lit up the sets with his presence. "We have the cutest visitor on set today," he captioned a photo, in which, a dressed up Kareena cuddles Taimur. Kareena's sister Karisma Kapoor perhaps ran out the red-heart emoji as she posted all of them in the comments section.

Here's how Taimur has been chilling with Kareena at her workplace:

We have the cutest visitor on set today

This one reminded us of a photo from August 2017, one shared by Karisma Kapoor with the caption: "We had a special visitor on our set yesterday." Kapoor sisters Kareena and Karisma were shooting for a jewellery brand when Karisma's daughter Samiera and son Kiaan landed up on sets with Taimur, who was all of eight-months back then.

Kareena Kapoor, who returned to work within months of Taimur's birth, marked her first post-pregnancy film with Veere Di Wedding. At the trailer launch of the film in 2017, she had revealed how Saif Ali Khan motivated her to resume work soonest: "It was Saif who kind of pushed me and said 'I think you should hit the gym and get back to the studio'. He said, 'Take your son with you and set an example to other mothers'," PTI quoted her as saying.

Little Taimur, who will celebrate his third birthday in December this year, accompanies not only mom Kareena to work but also dad Saif Ali Khan to his shoot sets.