"Safety Over Comfort," Writes Sunny Leone, Who Had A Tough Time Boxing With Her Mask On 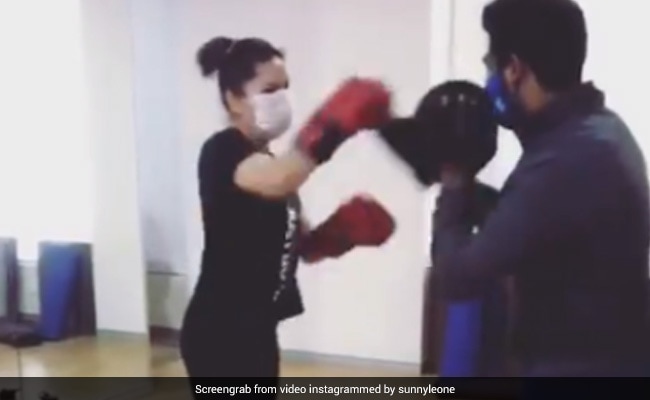 Sunny Leone in a still from the video. (courtesy sunnyleone)

Sunny Leone rarely shares workout videos. Friday, however, was an exception and we are not complaining. The actress treated fans to a peek into her boxing session. Sunny Leone is self-admittedly not a "fighter", but we saw her trying something new. She revealed that the technique she learnt is something fighters use if "they are hit in the head and get dizzy". Dressed in all black athleisure, Sunny Leone put on her boxing gloves and started spinning around...Sorry, we lost count. The actress is seen wearing a face mask because, "it's more difficult to box with a mask on! But safety over comfort at this moment."

Sharing the fun video with her Instafam, the 39-year-old thanked trainer Arif and wrote, "Don't always post workout videos but I thought this was fun. A technique used by fighters who are hit in the head and get dizzy. I'm no fighter but it was fun to try this. Lol! Thanks, Arif."

Sunny Leone's Instagram has always been a fun space. For instance, take a look at the time when her husband Daniel Weber joined her for a fight. We absolutely loved watching the husband-wife duo take on each other for a boxing clash. While Sunny Leone's training day looks all efficient and proper, Daniel's Instagram Stories tell a different tale.

Daniel's video will reveal to you that he could not stop laughing when Sunny Leone refused to fight saying she is "tired". He also said that he could not focus due to Sunny Leone's ongoing shenanigans and called her a "quitter." The two, who have been married for 10 years, are true couple goals. Sunny Leone and Daniel recently celebrated their wedding anniversary with adorable social media posts. "Happy 10th Anniversary to the man I love! I pray we walk through this life together until our dying days. You are my rock and my hero! Love you baby," wrote the actress.

Daniel wished his wife saying, "10 years! I love you Sunny Leone - I love our crazy life! Thank you for being the voice of reason."

Last year, Sunny Leone and Daniel Weber moved to Los Angeles amid the pandemic. However, they returned to India after a few months and are currently settled in Mumbai. Sunny Leone is the co-host of the reality show Splitsvilla season 13. She has announced that her next movie - titled Shero - will be released in Tamil, Hindi, Telugu, and Malayalam. The psychological thriller is directed by Sreejith Vijayan. Sunny Leone will also be seen in the action web series Anamika directed by Vikram Bhatt.