What Sunny Leone Wants To Wear To The Filmfare Awards. We Dare You

Sunny Leone wore a neon tank top and paired it with denims. 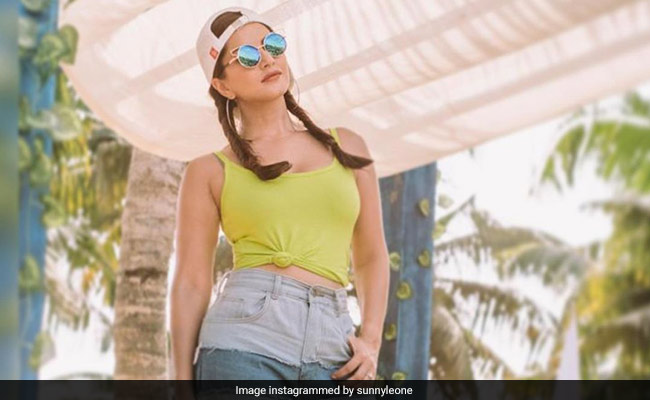 Wearing gowns on a red carpet event is so yesterday for Sunny Leone. The actress sported an uber-cool look hinting that she would rather go casual to an award function. The 39-year-old wore a neon tank top and paired it with denims. Sunny styled her tresses into two braids and tied the top in a knot. She added to the oomph factor by putting on a cap, hoop earrings and coloured shades. Fans were impressed and filled the comments box with fire and heart emoticons. The photos were clicked on the sets of Splitsvilla 13 in Kerala.

Before this, Sunny turned into a Naagin for the behind-the-scenes pictures with co-host Rannvijay Singha. The caption says, "You don't stand a chance, Rannvijay Singha. I got you! Muuaaahhahahahaha! Das diya bhai ko! #BehenBaniNaagin."

The actress recently unveiled a motion poster of her upcoming film, Shero. Her face is smeared with bruises and blood in the clip shared on Instagram. The movie, directed by Sreejith Vijayan, will be released in Malayalam, Hindi, Tamil and Telugu languages. Earlier, Sunny was a part of the Malayalam film, Madhuraraja, featuring Mammootty in the lead.

The mom of three gave the Internet a foretaste of how her weekend is going to look like. Sunny shared snaps in a mini orange dress, sipping on some beverage. The star wrote in the caption, "Hang on!! You're halfway there" as she soaked into some 'Wednesday vibes.'

Next project for the diva is The Battle of Bhima Koregaon with Arjun Rampal.