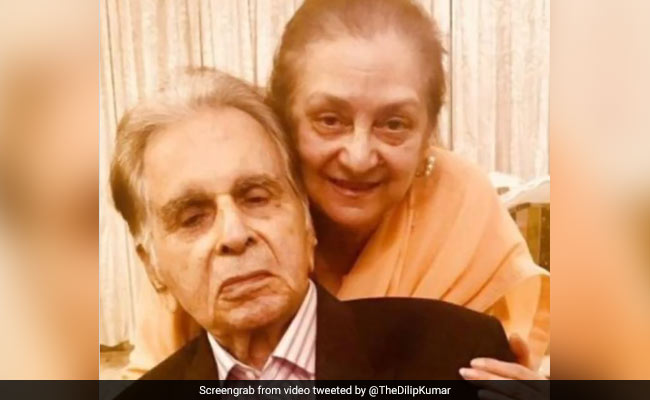 Dilip Kumar and Saira Banu in a still from the video. (courtesy: TheDilipKumar)

Veteran actor Dilip Kumar is doing absolutely fine on the health front. On Friday, the actor's wife and actress Saira Banu shared an update in the form of an audio-visual message, on the actor's official Twitter account. Saira Banu said that the 97-year-old actor, who was admitted to Mumbai's Lilavati hospital after suffering from a severe backache, is doing fine now. In the video, she shared several pictures of herself along with the legendary actor and said, "Hello everyone, I'm so happy to tell all of you that Dilip saab is a lot better. He had a very severe back ache and we had to go and check it out at Lilavati and we checked it out and came back." She added, "Sab kuch theek hai, allah ka shukr hai, aap sab ki dua hai". We have your love. We have your affection and we are so grateful to you and so grateful to God. God is kind, thank you."

Dilip Kumar was admitted to Mumbai's Lilavati hospital and was diagnosed with mild pneumonia in November 2017 and 2018. However the actor recovered and returned home just in time for his birthday celebrations.

Dilip Kumar is best-known for his performances in classics such as Kohinoor, Mughal-e-Azam, Shakti, Naya Daur and Ram Aur Shyam among others. He was last seen in the 1998 film Qila.