Runway 34 Review: Rakul Preet Singh gives a solid account of herself. As for Amitabh Bachchan and other actors, the path is riddled with air pockets caused by blurry writing. 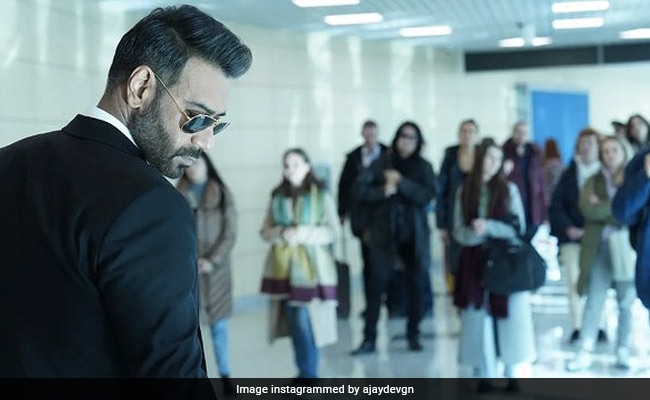 In his third film as director, Ajay Devgn puts the ghost of Shivaay to rest. He trains the spotlight on himself in an inspired-by-true-events aviation drama that examines the ‘human factor' involved in commanding a passenger plane through severe turbulence. Runway 34 isn't exactly Bollywood's answer to Sully, but the lead actor makes the most of the opportunity. The director does not lag far behind.

Runway 34, written by Sandeep Kewlani and Aamil Keeyan Khan, is magnificently executed and abounds in moments, especially in the first half, that have the potential to take one's breath away. Yes, the film would probably have soared much higher and gone much further had its return to terra firma in the second half been scripted with a little more imagination.

Notwithstanding the bumps that it encounters along the way, Runway 34, running in the theatres, has many a strong point, not the least of which is the fact that it wastes absolutely no time to touch cruising altitude.

It stays airborne for half of its 148-minute runtime and that is where all the action is concentrated and cinematographer Aseem Bajaj and the visual effects team are at their very best. When visceral action gives way to verbiage post-intermission, the film loses some ground.

An exceptionally skilled but temperamental commercial pilot, captaining a flight from Dubai to Kochi, flies into a storm that threatens the lives of his passengers and the longevity of his career. He boasts that he has nearly 17,000 hours of flying behind him, but with the plane buffeted by rough winds and a cyclone about to make landfall at the destination all his acumen is put to the test.

First Officer Tanya Albuquerque (Rakul Preet Singh) – the pronunciation of her family name poses a challenge to everybody around – is severely rattled by the harrowing experience. Captain Vikrant Khanna (Devgn), in contrast, is an epitome of calmness amid mounting turmoil. He betrays only mild signs of nerves as he takes a string of decisions that seem to defy logic.

The first half of Runway 34, which focuses on an airliner carrying 150 passengers and swaying between disaster and deliverance, is sharp and gripping. Of course, the focus is unwaveringly on the unflappable hero. He has promised his daughter, who turns six the next day, that he will be home for her birthday come what may.

The lady pilot alongside him in the cockpit has only a secondary role to play. The flight attendants – the camera settles on only a couple of them on a couple of occasions – are worse off. They are insignificant bit players not unlike the other women in the story, notably the pilot's wife and his lawyer.

In Runway 34, the ladies are never in control. The first officer and the air hostesses hit the panic button a bit too soon, which can only mean that they have been thrown into the deep end without sufficient training to deal with emergency situations.

The drama onboard – it revolves, among others, around an aged woman (Flora Jacob) who gasps for breath and prays for a safe landing – is engaging enough to keep the film afloat. Indeed, as long as Runway 34 is in the midst of its midair action, it is completely rooted to its principal purpose, which is to generate tension.

Once the investigation into the chain of events on that fateful flight and the ‘mountain' of errors that the captain is accused of having committed begins, Devgn is joined by Amitabh Bachchan, playing a hawk-eyed aviation expert who grills Captain Khanna and First Officer Albuquerque in order to substantiate his conviction that the former's cavalier ways had put the lives of his passengers at grave risk.

In moving from pure, unalloyed adrenaline-pumping scares to a torrent of verbal exchanges between the pilots and the inquisitor, Runway 34 veers just a tad off its flight path. Mercifully, the resultant blips are only minor irritants and do not blow the film off the sky. Runway 34 remains watchable despite a few false notes emanating from the characters played by Amitabh Bachchan and Boman Irani (as the owner of the airline).

In a tale that stems from reality, the two are like stock characters – one an officious school ‘headmaster' determined to bring an errant ward to book with his arsenal of chaste Hindi terms that he instantly translates into English as the trial unfolds and the words pile up, the other a presumptuous entrepreneur bent upon saving his company's brand value at all cost.

Runway 34 hinges on the heroism of a maverick pilot who sets his own rules but it leaves you wishing for a back story that could make Captain Khanna a more rounded and more relatable figure. All that we are repeatedly told is that he has a photographic memory, which comes to the fore when he has to recall past events down to the minutest details or grasp pre-flight briefings quickly.

The captain has a few scenes with his wife, Samaira (Aakanksha Singh), but they do not add up to much because they tell us little about what makes him the kind of man he is. Nor do his stray exchanges with his lawyer (Angira Dhar), whose brief to him is not to reveal anything to the persistent interrogator playing mind games with him. If that is the reason why Captain Khanna is allowed to be a shadowy figure, it obviously poses a bit of a challenge.

The audience, like the inquiry that is conducted by the pompous Narayan Vedant (that is the name of the shuddh Hindi-spouting interrogator, is left to piece together the details of the flight and the salient features of the personality of the protagonist on the basis of what the data recorder reveals. Here, too, we only skim the surface.

Be that as it may, Runway 34 makes a fair fist of putting one man's brush with danger at the centre of a riveting narrative that not only keeps the audience on tenterhooks but also raises relevant questions about the apportioning of blame for a flight gone awry.

Is the pilot the only one at fault when matters spiral out of control or are there a whole lot of other elements – an act of God, the weather prognosis, the air traffic control tower, the airline's unrelenting emphasis on profit, et al – at play when a plane runs into trouble 35,000 feet above the ground? Runway 34 takes a shot at that question and comes up with an answer that makes enough sense not to be dismissed offhand.

Ajay Devgn, with a consistent performance that never goes off the radar, powers Runway 34. Rakul Preet Singh, despite being relegated to playing second fiddle, gives a solid account of herself. As for the other actors, Amitabh Bachchan included, the path is riddled with air pockets caused by blurry writing. But with its gears in order and enough fuel in its tank, Runway 34 makes a smooth landing.

Heropanti 2 Review: Neither Tiger Shroff Nor Nawazuddin Siddiqui Can Salvage This Smashup