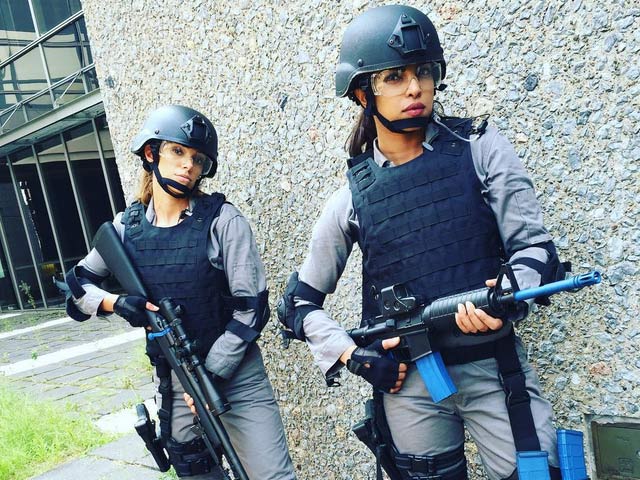 New Delhi: If you are confused between Priyanka Chopra's multiple projects - and who wouldn't be? - there's always Twitter to remind you. What with releases of the first song from her next film Bajirao Mastani and the first poster of her 2016 movie Jai Gangaajal, Priyanka's America TV show Quantico has almost been upstaged. (Also Read - Jai Gangaajal Poster: Priyanka Chopra Isn't to be Messed With)

Almost, but not quite. In a tweet, the 33-year-old actress has reminded us that Quantico arrives in just a few weeks. (Also Read: Priyanka Chopra on What's "Frighteningly Exciting" About Quantico)

The name of the 1st episode of #Quantico is "Run." Can't wait for you to run to your TV on Sept 27 for @QuanticoTV! pic.twitter.com/Vhnvpgtazm

Alex is an FBI rookie - Quantico is the name of the FBI training base - and ends up being implicated in a terror plot. The show also stars Jake McLaughlin, Annabelle Acosta, Johanna Braddy and Yasmin Al Masri.

Priyanka has diligently documented her experiences on the sets of Quantico on her Instagram account. (Also Read - Priyanka Chopra After Quantico Day 1: Don't Know if I'm Tired or Alive?)

Meanwhile, this poster featuring Priyanka as cop Abha Mathur in Jai Gangaajal is creating quite a stir:

So proud! Thank you @prakashjha27 for giving me 'Jai Gangajaal'! In theatres on March 4, 2016 - over to u guys! pic.twitter.com/rNtFfHkjol