Viral: This Video Of Ram Charan And Jr NTR With Their Wives Is Winning The Internet

On Friday, Jr NTR and Ram Charan gave their fans a sneak peek into their Japan diaries 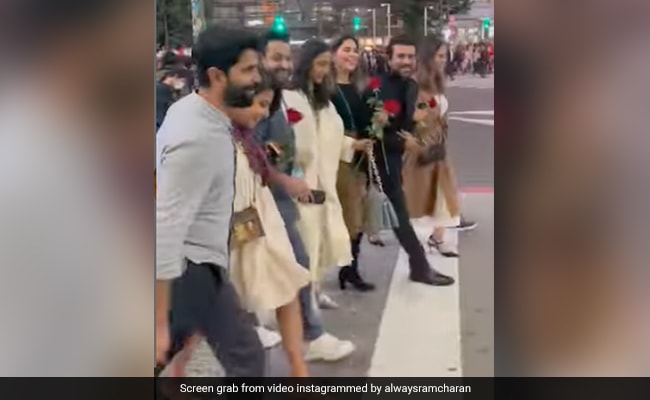 Ram Charan and Jr NTR, who are in Japan for RRR release, are having a gala time in the country. The actors are accompanied by their wives – Upasana Kamineni Konidela and Lakshmi Pranathi – and other members of the film's team. On Friday, Jr NTR and Ram Charan gave their fans a sneak peek into their Japan diaries. They shared a BTS clip from Shibuya Crossing, the iconic intersection in Tokyo. They are seen walking at the crossing, hand-in-hand and laughing their hearts out. Ram Charan looks dashing in a black outfit while his wife Upasana is seen twinning with him in a black turtleneck top, a brown skirt and black boots. Jr NTR and his wife Lakshmi Pranathi look amazing in blue and off-white attires. “Together forever! RRR,” wrote Ram Charan in the caption. He also shared a similar video of themselves crossing the Shibuya intersection and wrote: “BTS, RRR movie.” The SS Rajamouli directorial was released in Japan on Friday.

Ram Charan, Jr NTR and Upasana Kamineni Konidela shared snippets from RRR premiere show in Japan. “It's show time! RRR in Japan,” she wrote for this post. The first picture features her posing with Lakshmi Pranathi and SS Rajamouli's wife Rama Rajamouli. The second photo shows the filmmaker with Ram Charan and Jr NTR by his side.

We love this photo of Jr NTR and Lakshmi Pranathi. The actor captioned it: “All set for RRR premiere in Japan!”

RRR released in March. It has been garnering a whole lot of praise from Hollywood stars and filmmakers as well for its cinematography and action sequences. The film also stars Alia Bhatt and Ajay Devgn.

Happy Birthday, Prabhas: From Adipurush To Salaar, 5 Latest And Upcoming Films Of The Actor