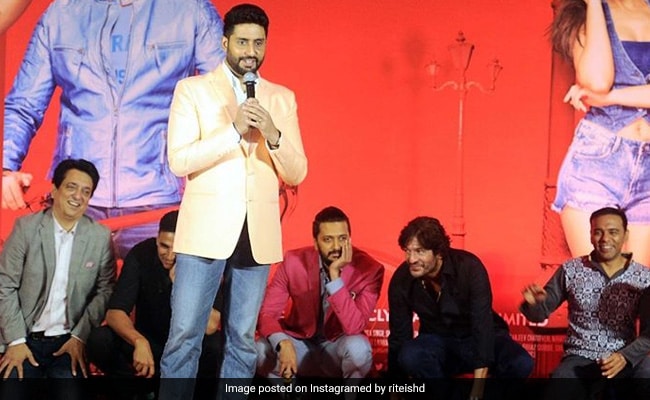 On Abhishek Bachchan's 44th birthday, his Housefull 3 co-star Riteish Deshmukh wished him in a quirky way on social way. Here's how - the Marjaavaan actor shared an ROFL photo from the promotional diaries of their 2016 film (the third instalment of the Housefull series) and accompanied it with a hilarious caption, in which he recalled the day when Abhishek "brought the entire star cast of Housefull 3 to their knees." In the photograph, while Abhishek can be seen interacting with the media holding a mic, his co-stars Akshay Kumar, Riteish Deshmukh, Chunky Panday and directors Sajid Nadiadwala and Farhad Samji can be seen sitting on the floor. Housefull 3 also featured Jacqueline Fernandez, Nargis Fakhri and Lisa Haydon in pivotal roles.

The day @bachchan brought the entire star cast of Housefull 3 to their knees. #HappyBirthdayAbhishekBachchan

Apart from the photo, Riteish also tweeted an adorable birthday wish for Abhishek, which read: "Dearest Abhishek Bachchan, wishing you a smashing birthday. May you have a fabulous one - happiness, good health and loads of love...*chestbump*... dude."

Dearest @juniorbachchan wishing you a smashing birthday- May you have a fabulous one - happiness, good health & loads of love. ...... *chestbump*..... dhudhhhh

Riteish Deshmukh and Abhishek Bachchan have co-starred in films such as Rohan Sippy's Bluffmaster! (2005), Ram Gopal Varma's Naach (2004) and Housefull 3 (2016). The duo have also made cameo appearances in the 2005 film Home Delivery, which featured Vivek Oberoi, Ayesha Takia, Mahima Chaudhary and Boman Irani.

On the work front, Abhishek Bachchan will next be seen in a couple of films such as Anurag Basu's Ludo, Kookie Gulati's The Big Bull and Diya Annapurna Ghosh's Bob Biswas.