"Rishi Kapoor Was The Keeper Of Our Hearts": Priyanka Chopra Writes Eulogy In Time Magazine

"What made Rishi Kapoor's love different? It had all the passion of a Shakespearean hero with a generous dollop of innocence," wrote Priyanka 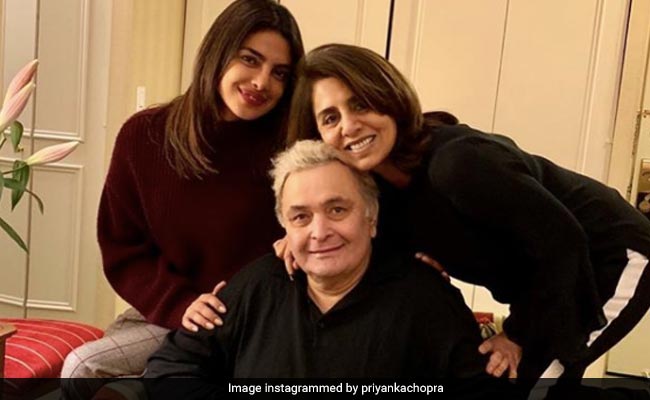 Actress Priyanka Chopra, who worked with Rishi Kapoor in 2012 film Agneepath, wrote an eulogy for the late actor for Time Magazine. Introducing Rishi Kapoor as the third generation of Bollywood's "first family" Kapoors, Priyanka began her piece by writing that Rishi Kapoor charted his own course in his journey in the Hindi film industry: "The Kapoors are Indian cinema's first family-but that never defined Rishi Kapoor, who died April 30 at 67. The son of the legendary Raj Kapoor, he forged his own path, building an illustrious career to create his own legacy." Rishi Kapoor started acting as a child artiste in his father Raj Kapoor's films and after his debut as the male lead in Bobby at the age of 21, he became the most popular romantic hero of his time.

"From his first leading role in 1973's Bobby, he was the keeper of our hearts, ushering in a new era of romance in Hindi movies. His effervescence and flamboyance instantly set him apart. He was a hero who could feel without being maudlin. He was mischievous, rebellious, passionate-and he made falling in love seem so easy and so within our grasp. What made Rishi Kapoor's love different? It had all the passion of a Shakespearean hero with a generous dollop of innocence added in," wrote Priyanka in her piece. "His charisma was in his extraordinary smile, one that made his fans go weak in the knees. And when he danced, he made us all want to jump up and join him," she added.

"I had the privilege of working with him in Agneepath, in which he played a fierce, no-holds-barred character, someone to hate rather than love. The versatility of this genial man will never be experienced again," wrote Priyanka. Rishi Kapoor's portrayal of the villainous Rauf Lala in Agneepath is one of his most remembered performances among films such as Mulk, Delhi 6, Kapoor And Sons and 102 Not Out.

"The loss of Rishi Kapoor is the end of an era for Hindi cinema, but his contribution to the world of films has been and will always be an inspiration for generations to come. As his father said in his legendary movie Mera Naam Joker, the show must go on. Rishi Sir, thank you for the magic, the memories and your candid heart. I'm so grateful for having had the opportunity of knowing you personally as well-your candor, your laughter, your zest for life. That's how I'll always remember you," added Priyanka in her tribute.

Addressing Rishi Kapoor as how only his close ones would do, Priyanka wrapped her post by saying: "Farewell, Chintu uncle. Hindi cinema will never be the same."

Priyanka Chopra, who lives in the US, visited Rishi and Neetu Kapoor in New York last year when he was undergoing treatment for cancer. "Heart is heavy," Priyanka had posted after Mr Kapoor's death.

My heart is so heavy. This is the end of an era. #Rishisir your candid heart and immeasurable talent will never be encountered again. Such a privilege to have known you even a little bit. My condolences to Neetu maam, Ridhima, Ranbir and the rest of the family. Rest in peace Sir. #rishikapoor

Rishi Kapoor died at the age of 67 after a long battle with cancer. The 2019 films The Body and Jhootha Kahin Ka remain his last. Mr Kapoor was to star in a Bollywood adaptation of The Intern with Deepika Padukone.