The actors' spokesperson said, "They wish for everyone to be healthy and safe" 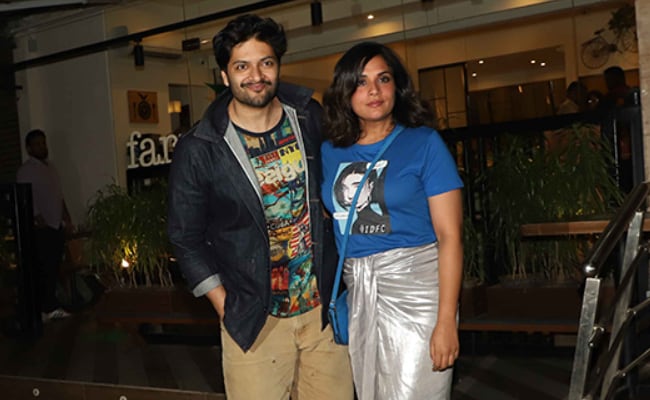 Richa Chadha and Ali Fazal were photographed in Mumbai.

Richa Chadha and Ali Fazal have postponed their wedding date to later half of 2020, confirmed the actors' spokesperson to news agency PTI. Last month, the couple's spokesperson had confirmed that Richa and Ali had applied for and also received a court date to register their marriage in a statement to new agency IANS. They were planning on a wedding date in the last week of April. However, due to the global Coronavirus outbreak, Richa and Ali have postponed their wedding date as they "wish for everyone to be healthy and safe." After rescheduling, the couple has tentatively planned on their wedding festivities in the later half of 2020.

Speaking to PTI, the actors' spokesperson said, "Given the current scenario and the unfortunate turn of events owing to the COVID-19 pandemic globally, Ali Fazal and Richa Chadha have decided to postpone their wedding functions to the later half of 2020 tentatively." The couple's spokesperson added, "They wish for everyone to be healthy and safe and at no cost would want their friends, families and well-wishers to be affected."

Earlier, some unconfirmed reports did rounds on the Internet stating that the couple has postponed their wedding festivities due to the pandemic. A report in mid-day quoted a source close to Richa and Ali as saying, "Many of their guests were to fly in from the US and Europe for the do. Also, the couple was hoping to have their nuptials in Delhi, which is currently on a partial lockdown. So, they think it's best to delay the wedding to later this year."

In a statement given to IANS in February, the couple's spokesperson confirmed Richa and Ali's court wedding plan, which would be followed by festivities and said, "Currently, only the date for the registration has been taken. By process the window that is valid is for three months from the date that has been allotted. The couple are working towards an official registration in the last week of April, post which the celebrations will follow."

Richa Chadha occupied the top spot on the trends list earlier this month for posting a picture on her Instagram story, which appeared to be her engagement ring.

The mid-day report also stated that Varun Dhawan and his girlfriend Natasha Dalal, who were reportedly looking forward to plan their wedding in the first half of 2020, have also postponed their wedding date to November this year in a statement by a close source to the couple. The source was quoted as saying, "Looking at the current scenario, they have decided to tentatively push the shaadi to November and have reverted to their original choice of destination, Thailand." The source added, "The initial plan was to have an intimate wedding on a private island in Thailand, but it was scrapped last month in favour of a destination wedding in Jodhpur. Eventually, they called that off too and were considering having a low-key ceremony in Mumbai."

Talking about the Coronavirus outbreak, India has recorded four deaths due to the spread of the virus.