Richa Chadha And Ali Fazal To Have Court Wedding In April, Says Spokesperson

"All we can say is that it's a happy occasion and all the parties involved are elated," said the actors' spokesperson 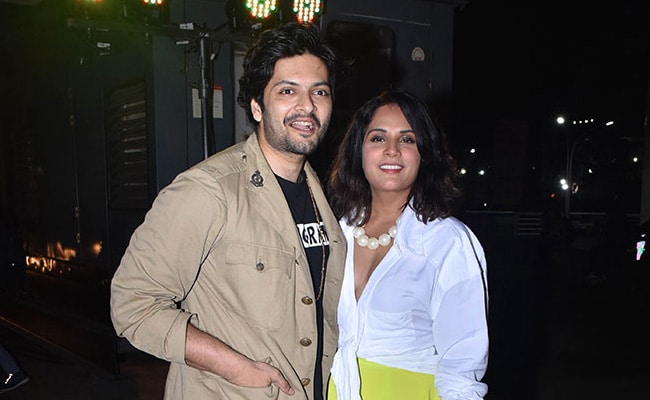 Richa Chadha and Ali Fazal were photographed in Mumbai.

Richa Chadha and Ali Fazal have applied for and received a court date to register their marriage, confirmed the couple's spokesperson to news agency IANS. Richa, 33, and Ali, 33, have been trending off late with unconfirmed reports placing their wedding date in April. As confirmed by the actors' spokesperson, they are indeed looking at an April date - a court wedding will take place in Mumbai in the last week of April followed by festivities, as per the statement. Richa and Ali, co-stars in the films Fukrey and Fukrey Returns, are believed to have been dating since 2015.

Speaking to IANS, the spokesperson said, "Currently, only the date for the registration has been taken. By process the window that is valid is for three months from the date that has been allotted. The couple are working towards an official registration in the last week of April, post which the celebrations will follow. All we can say is that it's a happy occasion and all the parties involved are elated." It is not clear whether Richa Chadha and Ali Fazal will have a traditional wedding ceremony in addition to the court wedding.

A report in Times Of India recently quoted a source as saying Richa Chadha and Ali Fazal had set an April wedding date in New Delhi, where Richa grew up. "They are all set to take the big leap. The wedding will happen in Delhi among close family and friends. The festivities will go on for two days. There will also be a party for their Bollywood friends in Mumbai after that."

Richa Chadha has been vocal about her relationship with Ali Fazal. In an interview with Bombay Times, she talked about her thoughts on getting married and said, "We are waiting and chilling, and we are in a happy space."

The actress has made several appearances with her boyfriend in the past. Richa Chadha was recently pictured with Ali Fazal at a special screening of Vicky Kaushal's new film Bhoot: Part One - The Haunted Ship. They also arrived together for Javed Akhtar's 75th birthday celebration and a special event organized by Amazon for CEO Jeff Bezos.

On the work front, Richa Chadha was last seen in Panga, co-starring Kangana Ranaut. The actress is busy with her forthcoming releases with include Abhi Toh Party Shuru Hui Hai, Ghoomketu, Shakeela and Bholi Punjaban. Meanwhile, Ali Fazal is working on the international production Death On The Nile.