"It was such an anomaly when I started," wrote Priyanka Chopra 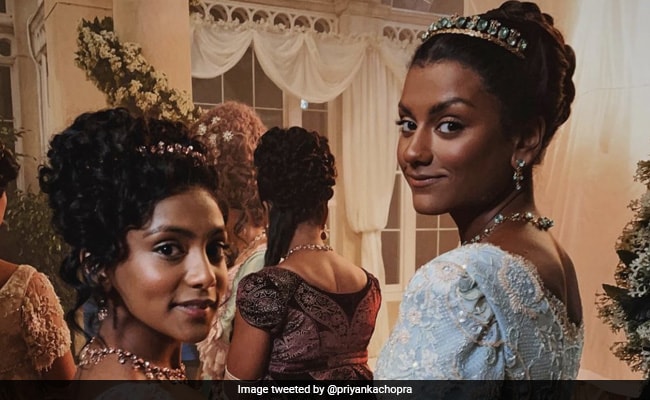 A still from Bridgerton 2. (courtesy: priyankachopra)

Priyanka Chopra, the first South Asian woman to headline the cast of an American television show (Quantico), gave a huge shout out to the second season of Netflix's popular series Bridgerton. In her tweet, Priyanka Chopra added the hashtag #representationmatters and she stated that it was "such an anomaly" when she started out and that it is "wonderful" to see "desi representation" on such a big platform. Bridgerton 2's Sharma sisters, Edwina Sharma and Kate Sharma, have been portrayed on screen by actors Charithra Chandran and Simone Ashley. Priyanka Chopra tweeted: "I have to say... it's so wonderful to see desi representation on mainstream TV. It was such an anomaly when I started. Love the show and the Sharma sisters!#representationmatters."

I have to say.. it's so wonderful to see desi representation on mainstream TV. It was such an anomaly when I started. Love the show and the Sharma sisters!#representationmatters@shondarhimes@netflix@bridgertonpic.twitter.com/3nXPMDWvyn

Priyanka Chopra has featured in many Hollywood projects. She is also a tech-investor and counts as a UNICEF Goodwill Ambassador. She owns a haircare brand and also opened an Indian restaurant in New York last year.