Raveena Tandon is missing in the video 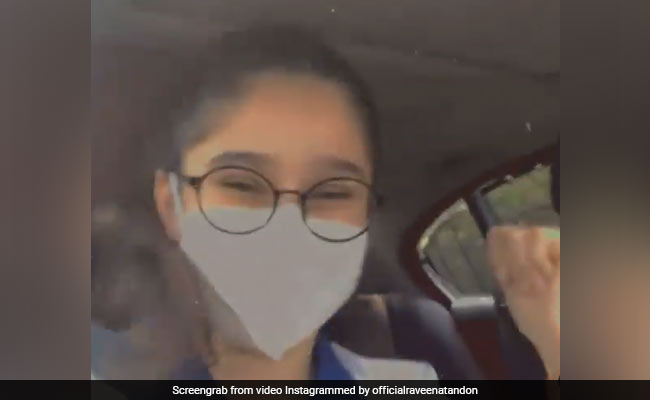 Raveena Tandon made our Thursday better as she treated her fans to a video in her latest Instagram post. While Raveena is not in the clip, her post is proof of how her family has fun together. The clip features her husband Anil Thadani and daughter Rasha Thadani. In the video, Anil and Rasha can be seen sitting inside the car. Both of them are enjoying the car ride. Rasha recorded this video on her way to school before she appeared for her Class 10th board Spanish oral exam amid the coronavirus pandemic.

While it was a father-daughter moment, we are surely missing Raveena Tandon in the video. In her caption, Raveena shared that it is a "normal feature at the Thadani household." She wrote, "just another car ride with the Thadanis... A normal feature at the #thadanihousehold. To unwind before giving a Spanish oral exam. A drive to school #10thboards #boardexam #intimesofcorona physical exams in the midst of a pandemic."

Raveena's daughter Rasha had initially shared the clip on her Instagram handle. Rasha wrote, "just another car ride with the Thadanis."

We also found a picture of Rasha holding an adorable puppy in her hands on the platform. South star Prabhas sent it as a surprise gift to Rasha a day before her Spanish oral exam. In the caption, Rasha thanked him saying, "Baby blue! Best surprise one day before a Spanish oral. thank you Prabhas for sending him over."

For those of you who don't know, Prabhas is a big fan of Rasha's mom and actress Raveena Tandon.

Raveena Tandon married Anil Thadani, a film distributor in 2004. Rasha Thadani and Ranbirvardhan Thadani are their children. In 1995, Raveena adopted two girls namely Pooja and Chaaya as a single mother.

In terms of work, Raveena Tandon will next be seen in a web series titled Legacy, in which she has been paired opposite Akshaye Khanna for the first time. While Raveena and Akshaye previously worked in the 2003 film LOC: Kargil, they didn't share screen space in it.

Speaking of Akshaye Khanna, the actor is making his digital debut with the upcoming web series Legacy. Vijay Gutte is directing it.