Ranveer Singh Shares A Throwback From The Time "When WWF Was Life." His Inspiration - Hulk Hogan

"Whatcha gonna do, when Hulkamania runs wild on you?" read Ranveer's caption 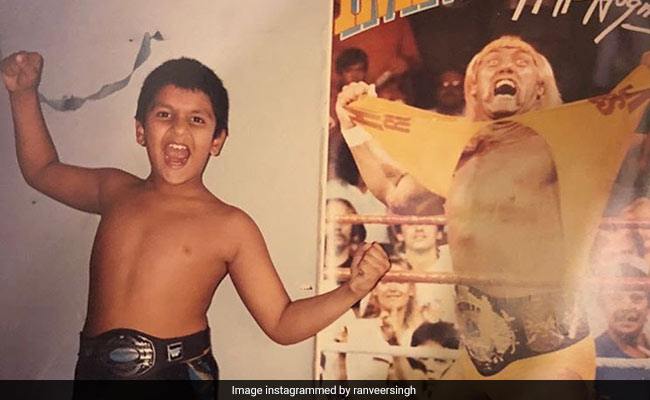 Ranveer Singh's latest Instagram entry establishes one thing for sure that the actor was always an entertainer. On Monday, the 34-year-old actor shared a picture from his childhood days when he was a huge fan of WWE (World Wrestling Entertainment), previously known as WWF (World Wrestling Federation). In his post, Ranveer revealed that he had a poster of ace wrestler Hulk Hogan in his room. Sharing a picture of himself from his childhood days, juxtaposed with a poster of Hulk Hogan, Ranveer wrote in his caption: "Whatcha gonna do, when Hulkamania runs wild on you. Monday feeling. Throw it way back to when #WWF was life. I had a poster on my wall of the immortal Hulk Hogan."

"Whatcha gonna do, when Hulkamania runs wild on you!" #mondayfeeling throw it way back to when #WWF was life had a poster on my wall of The Immortal @hulkhogan

Not just WWE, Ranveer Singh is also a fan of sports. The actor will soon be seen playing legendary cricketer Kapil Dev's role in Kabir Khan's sports drama '83, which is based on India's iconic victory at the 1983 World Cup. The actor is also married to former badminton player and Bollywood actress Deepika Padukone, who will be seen playing the role of Kapil Dev's wife Romi Bhatia in '83. Unveiling Deepika's look from the film earlier this year, Ranveer wrote: "The wind beneath my wings. The heart of the hurricane."