Ranveer Singh shared a picture of his younger self posing with add on Dracula-esque canine teeth. Cute na? 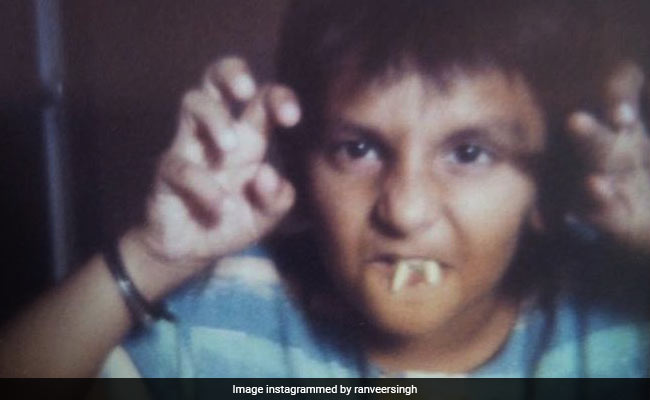 Actor Ranveer Singh shared a throwback picture from his childhood album which set the mood for Halloween a tad bit early - actually a month early. But we're not complaining. The 34-year-old actor shared a picture of his younger self posing with add on Dracula-esque canine teeth. So far, Ranveer's actress wife Deepika Padukone hasn't shared a comment on the post - the actor couple are famous for their social media PDA. However, several celebrities and the actor's Instafam loved the post, which they've made clear through the remarks shared in the comments thread. Actress Aditi Rao Hydari, who co-starred with Ranveer Singh in "Padmaavat," posted ROFL emoticons while a fan of the actor suggested, "Hahahahahaha. You must star in a supernatural movie next."

Ranveer Singh is currently working with director Kabir Khan on upcoming film '83, in which he plays the role of Kapil Dev, the captain of 1983 cricket world cup-winning Indian team India. In the movie, Deepika plays Ranveer's onscreen wife. Recently, his film Gully Boy, which released in February this year, was selected as India's official entry for the Academy Awards in Best International Feature Film category.

After '83, Ranveer Singh will assign his dates to Karan Johar's Takht, which is reportedly based on Aurangzeb's bloody succession to the Mughal throne after imprisoning his father Shah Jahan. Ranveer reportedly plays Shah Jahan's younger son Dara Shikoh, whom Aurangzeb executed before ascending to the throne.