Ranveer Singh and Anil Kapoor are set to work together again 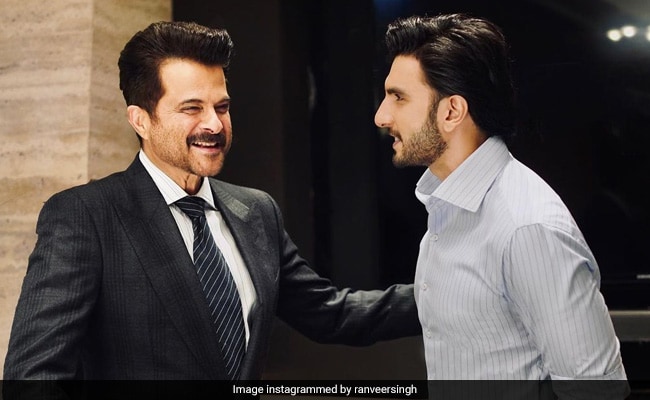 Ranveer Singh can't stop himself from singing praises of Anil Kapoor. If you are a fan of Zoya Akhtar's Dil Dhadakne Do, you might remember that Ranveer played his son in the film. Now, they are collaborating once again, and the 35-year-old expressed gratitude for the opportunity. One can sense Ranveer's enthusiasm through the note that reads, "Can't express the gratitude, the pride, the utter delight and sheer joy of collaborating with one of my most admired screen idols. I deeply cherish the bond that we share." Ranveer described Anil Kapoor as "one-of-a-kind. Giant of a performer. Legend of an artist. One of Hindi cinema's finest."

Anil Kapoor also shared the same photos and wrote, "The pleasure, the pride, the delight, the utter joy is all mine, Ranveer Singh! I cherish you and our friendship immensely!"

Ranveer and Anil Kapoor are a part of Karan Johar's next big directorial venture Takht. The filmmaker had announced the star cast of the period drama last year. Alia Bhatt, Vicky Kaushal, Kareena Kapoor Khan, Bhumi Pednekar and Janhvi Kapoor will be seen in pivotal roles. While Ranveer will reportedly portray the character of Dara Shikoh, Anil Kapoor is expected to feature as Aurangzeb's father Mughal emperor Shah Jahan. The project has been delayed indefinitely due to the pandemic.

Last week, Ranveer treated fans with photos featuring himself with wife actress Deepika Padukone. The romantic posts garnered a lot of attention from the Internet. Ranveer sported a pink hoodie and ear studs in the mushy boomerang with the caption, "Pac-Man eats the dot!"

Aren't they looking cute in this one?