Siddhant Chaturvedi said, "He hugged me and I have cried, he has kissed me, he has hugged me." 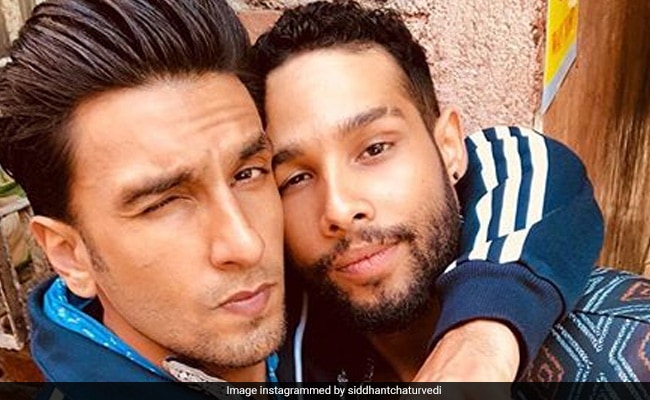 Actor Siddhant Chaturvedi, who catapulted to fame as MC Sher of Gully Boy, told Neha Dhupia on her chat show that he "emotionally made-out" with his co-star Ranveer Singh after the film was screened in Mumbai earlier this year, reported news agency IANS. Speaking on #NoFilterNeha Season 4, Siddhant Chaturvedi said, "We had a different moment. He hugged me and I have cried, he has kissed me, he has hugged me... Proper make-out session in middle of PVR Juhu... Yes, I have emotionally made-out with Ranveer Singh." Gully Boy, directed by Zoya Akhtar, was highly appreciated when it released in February this year. It has been selected as India's official entry for the 92nd Academy Awards in the Best Foreign Language Film category.

Gully Boy, inspired by the life of rappers Divine and Naezy, is the story of Murad (Ranveer Singh), who rises from the slums of Dharavi to the centrestage of homegrown rap with the help of his mentor MC Sher. The film also features Alia Bhatt and Kalki Koechlin.

A post shared by Siddhant Chaturvedi (@siddhantchaturvedi) on Aug 4, 2019 at 4:06am PDT

Meanwhile, speaking to Neha Dhupia on the show Siddhant revealed how Ranveer Singh mentored him during the filming of Gully Boy. "He aces every accent, he aces every body language. So, that's something that I learnt from him. I had a different voice. I had a different lingo in this film so I used to take notes from him. I was like, 'How do you do it?' So, he told me 'You keep recording on your voice memo whenever you are reading it out and you keep trying variations in that. And maintain consistency, bro. Be careful of that'," Siddhant said.

"We don't see his intelligent side much, but, you know he is very intelligent and he's very disciplined. He's just amazing," Siddhant added.