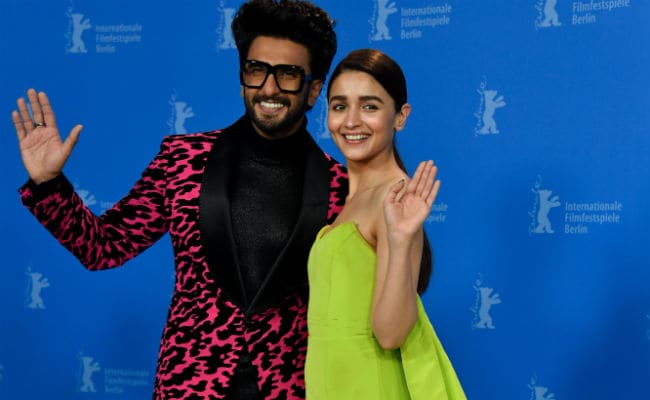 Ranveer Singh and Alia Bhatt at the screening of Gully Boy in Berlin. (Image courtesy AFP)

Gully Boy, starring Ranveer Singh and Alia Bhatt, opened to "packed house" at the Berlin Film Festival, where the film had its world premiere on Saturday. According to a tweet posted by Cameron Bailey - Artistic Director of the Toronto International Film Festival - Gully Boy commanded the "biggest cheers" he had heard in "20+ years" at the Berlinale (another name for the Berlin Film Festival). "Watched the Gully Boy world premiere tonight in a packed house with Ranveer Singh, Alia Bhatt and Zoya Akhtar (director) present. Biggest cheers I've heard in 20+ years at the Berlinale," he tweeted.

Smriti Kiran, Creative Director of the MAMI Mumbai Film Festival, who was present at the screening on Saturday night, echoed Mr Bailey on Twitter and added: "Packed house with the loudest, most passionate cheers. Berlinale gets a taste of the crazy Indian film fan at the world premiere of Zoya Akhtar's Gully Boy."

Ranveer Singh, dressed in a Tom Ford leopard-printed blazer, was in his element at the Berlin Film Festival. He also rapped for the crowd at the premiere. Here's a glimpse of Ranveer Singh taking Berlinale by storm:

Chandan *feels* in Berlin! Packed house with the loudest most passionate cheers. @berlinale gets a taste of the crazy Indian film fan @ the #WorldPremiere of #ZoyaAkhtar's #GullyBoy#ApnaTimeAayega@RanveerOfficial@aliaa08@kalkikanmani@nitin_baid@MrVijayVarma@SiddhantChturvDpic.twitter.com/5zaYmtnj7u

Gully Boy, inspired by the lives and work of rappers Naezy and Divine, is the story of a slum-based rapper who goes on to big a sensation in the world of homegrown rap and hip-hop music. Speaking about the film on the red carpet of the berlin Film Festival, Ranveer Singh, who plays the titular 'Gully Boy', old reporters: "It's got commentary on the class divide, it's got commentary on choices young people make - whether they want to be stuck in something that gives them no fulfilment versus pursuing their passion," reported news agency AFP.

Gully Boy is produced by Farhan Akhtar and Ritesh Sidhwani through Excel Entertainment. The film opens in India on February 14.